In 2012, while film director Andrea Marini was shooting his documentary Art of the Prank about Joey Skaggs, Joey was producing, directing and appearing in Pandora’s Hope, a fake short documentary about the ethics and perils of genetic modification in plant and human organisms. 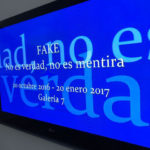 “Pandora’s Hope,” a fake documentary produced and directed by artist Joey Skaggs, will be on exhibition October 20, 2016 to January 29, 2017, at Institut Valencia d’Art Modern (IVAM). “FAKE. It is not true, it is not a lie”, Curated by Jorge Luis Marzo Where: Institut Valencia