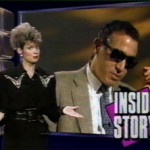 In 1988, Entertainment Tonight producers asked Joey Skaggs to appear on their show. They were planning the inside scoop on great hoaxes and hoaxers — how the news media falls for their stories, what to watch out for and how not to be fooled. Even though ET had previously interviewed Joey about his Bad Guys Talent Management Agency, he couldn’t resist the opportunity to hoax them. So, he sent his friend Norman Savage to do the interview. The segment aired with Norman as Joey. ET never retracted the story.