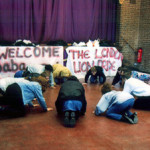 In February of 1995, Baba Wa Simba–Swahili for the Lion King–arrived in London ready to meet with his London Pride and later with the press. Born the son of American missionary parents in Kenya, Baba Wa Simba had grown up with the Masai at a lion sanctuary. His parents had been killed and eaten by lions, and, drawn to disenfranchised and troubled youth, he had developed his own philosophic approach to therapy, to heal the wounded animal within. Or, so he said. Baba Wa Simba was actually Joey Skaggs and the hoax was on the international media.