And If You Believe That, I Have a Bridge to Sell You

And If You Believe That, I Have a Bridge to Sell You: The Men Who Sold the Brooklyn Bridge, by Hannah Frishberg, Brownstoner.com, June 28, 2016

You may or may not have heard the well-known phrase, “If you believe that, then I’ve got a bridge to sell you.” But are you familiar with the details of the conniving con men and the swindles that inspired it?

The swindler is just as timeless a New York character as the swindled, so perhaps it will come as no surprise that many an unsuspecting fool has purchased the Brooklyn Bridge from a confidence man. 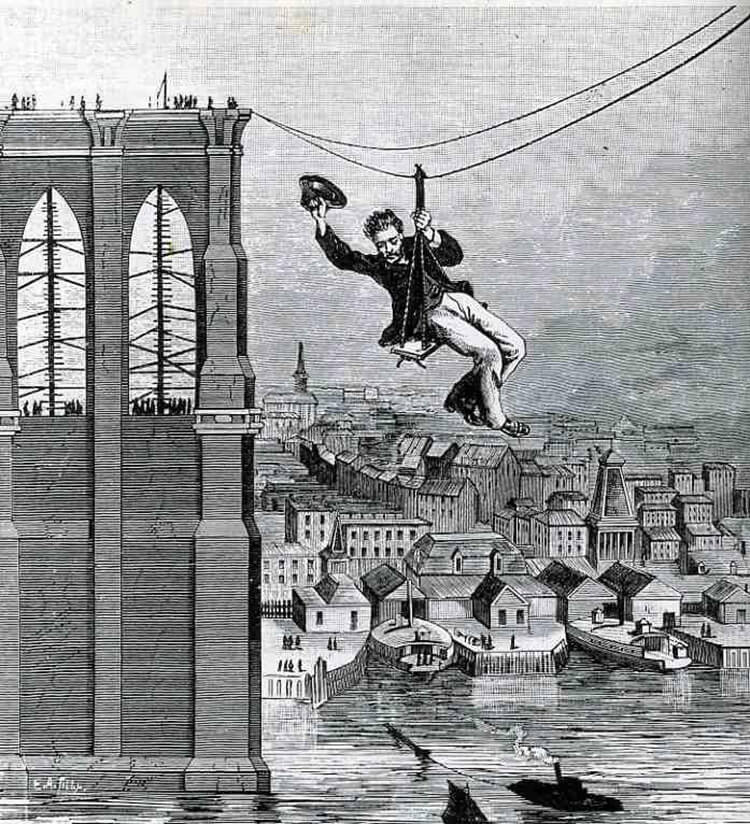 Since the bridge’s completion in 1883, men and woman have made a living selling it to the gullible. There’s William McCloundy, or “I.O.U. O’Brien,” as he was known to police, who served two-and-a-half years in Sing Sing for posing as the Brooklyn Bridge’s owner and selling it to a tourist in 1901.

McCloundy had a long history of false impersonations in the name of grand larceny, pretending to be a transatlantic liner captain and prison warden on different occasions, according to a 1928 New York Times article detailing one of McCloundy’s many arrests.

Then there’s George C. Parker who, according to an article detailing his arrest (also in 1928), included selling the Brooklyn Bridge in his exploits as well. His record also shows that, while serving time, he once stole a sheriff’s hat and overcoat and simply walked out of the prison, the New York Times reported.

As late as 1992, performance artist Joey Skaggs used a similar trick on the media, leaking a fake inter-office memo stating that the Dinkins administration, in an effort to raise funds for infrastructural repairs, was holding a lottery to rename the Brooklyn Bridge.