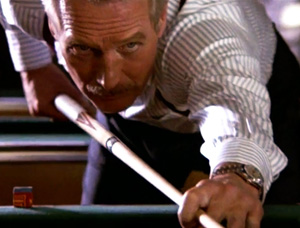 Late in October 1986, Joey Skaggs received a phone call from friend Sam Weiner who was coordinating a Democratic fund raiser for New York Senatorial candidate Mark Green. Skaggs had recently received publicity for his Bad Guys Talent Management Agency and Fat Squad hoaxes, so Wiener knew he was in contact with intimidating-looking people. 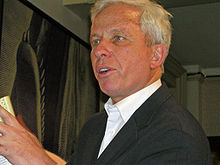 Paul Newman and Carl Sagan were giving speeches for the candidate at two different Manhattan locations on Halloween night, and they required bodyguards. Wiener wanted a moon-lighting cop or a security guard, but the committee didn’t have any money. They needed volunteers.

Skaggs offered to do it himself. Dressed in a black suit with mirrored sun glasses, wearing a fake police badge and carrying a realistic toy gun tucked in his waistband, he looked the part.

The first party was at a chic Soho gallery. Skaggs and his female undercover partner were introduced to Green and Sagan as their personal security for the evening. Skaggs covered Carl Sagan and his wife. His partner covered Mark Green.

The crowd never questioned the authenticity of the bodyguards. Hands clasped behind their backs, they scanned the crowd. Their presence was foreboding. At the same time, they were invisible to Sagan, who appeared to feel safe, protected from whatever dangers he perceived might be lurking at this event. Skaggs went everywhere Sagan and Green went.

The party moved to an elegant townhouse in mid-town, and Paul Newman arrived. Skaggs’ attention turned to his new charge. Newman had just finished making The Color of Money, a movie about a pool shark. There was a pool table in the townhouse so Paul Newman and Mark Green played pool to raise money for Green’s candidacy. A journalist yelled, “What a great headline-‘The Color of Money is Green!'”

At one point, another journalist thought he recognized Skaggs. In a loud, somewhat inebriated voice he shouted, “I know you! You’re…, you’re…” He couldn’t quite remember the name. Skaggs quickly and abruptly told him to step aside before he had to arrest him. That threw the heckler off just enough to make him doubt himself, which kept Skaggs’ identity safe for the moment.

The evening was a success until Wiener, who had invited Skaggs, leaned in to Sagan’s limo as he was about to leave and said, “Do you know who your bodyguard was this evening? It was Joey Skaggs, the world’s greatest hoaxer!” Sagan’s jaw dropped wide open. Maybe he was disappointed and maybe he was embarrassed. He had really played the part of the celebrity in need of a bodyguard to the max. And perhaps his self-importance had been somewhat trivialized by the experience. Anyway, he need not have worried. Joey Skaggs, if need be, would have taken a bullet for him.

The hoax was revealed in New York Newsday the next day. When Mark Green’s campaign people were called by the paper for a comment, they lied, saying that the bodyguard(s) had not been retained by them at all, but had crashed the parties. This is a small example of the ease with which political operatives will lie when expedient. And how the media can so easily become a conduit for disinformation.