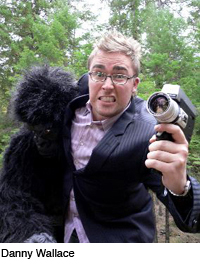 It Ain't Me Babe

“This opportunity came out of the blue and was too good to pass up. At the very least, it’s good for a laugh. It’s also a chance to again remind the public that the media we put our faith into does not always deserve it.” Joey Skaggs on sending an impostor to be interviewed for the Danny Wallace’s Hoax Files show.

Skaggs was contacted by producer Ben Sinden of ITV Factual, about a 90-minute special called Danny Wallace’s Hoax Files, to air in prime time on SkyOne throughout the UK on Monday, December 19, 2005. Sinden said Danny Wallace wanted to speak with the all-time great hoaxer Skaggs to see if he could teach him anything. In Skaggs’ experience, producers of shows like this tend to overuse flattery, thinking that people will jump at the chance to be on TV. But Skaggs prefers not to become involved with this type of show. He’d rather expose them for what they are–self-aggrandizing and exploitive infotainment.

So, on October 30, 2005, rather than do the interview himself, Joey sent his friend Norman Savage in his place. Although Wallace had claimed to be a big fan of Skaggs’ work, he apparently did not know the difference.

Savage, a novelist, has sat in for Skaggs before. In 1988 he appeared as Skaggs on Entertainment Tonight for a piece called “The Inside Story on Great Hoaxers,” and in 1991 sat in for him on To Tell the Truth where he stumped the panel without the show’s knowledge that he himself was a hoax.

Wallace’s apparent plan was to attempt to hoax the hoaxer. He switched places with producer Sinden, who donned Wallace’s signature glasses and messed up his hair. Savage, who had never met Wallace, was none the wiser, but apparently to his credit did a fine job impersonating Skaggs. Sinden proceeded to do the interview with Savage and each was happy in their duplicity, neither realizing the doublecross. 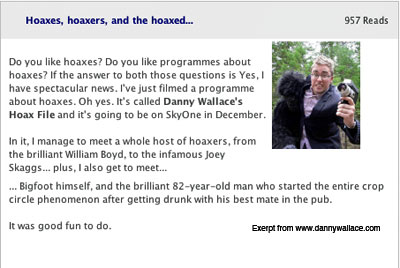 It wasn’t until after the shoot that the Skaggs switch was revealed to Wallace, and was further confirmed while reviewing news clips of Skaggs licensed from other networks for use in the show. Says Skaggs, “It stands to reason that had he figured it out during the interview, he would have busted Savage, on camera, and used it in the show.”

Realizing he’d been had, there was now a need for damage control. The trip to New York with the crew had cost the production company money. So now, how to salvage Danny Wallace’s anticipated “leg up” on Skaggs? On December 8, Wallace phoned Skaggs to tell him he knew that Savage had played him and that, in fact, he (Skaggs) had been hoaxed by him (Wallace). Wallace was now going to make Skaggs confess! Curious to know what he had planned, Skaggs asked, “Are you pulling the interview?” “No!” said Danny Wallace, gloating, “We’re going to show that it wasn’t me doing the interview with you! We’re showing a split screen with the fake you on one side and you on the other and we’ll cut to me posing as crew during the interview.” Skaggs replied, “Uh…Danny, but you didn’t succeed in hoaxing me because, uh, it’s not me!”

So, the piece aired showing a fake interviewer interviewing a fake interviewee, while gloating about it. Skaggs was told by viewers in the U.K. that the producers aired Skaggs’ phone conversation with Danny Wallace’s after the shoot. Recorded without Skaggs’ knowledge or consent, it was edited to appear as if he is congratulating Wallace for hoaxing him. However it was a mutual hoax-off between two impostors. Skaggs has seen this type of lame spin before. Embarrassed journalists who have fallen for his hoaxes, have frequently done follow-up stories to convince the audience that they knew the truth and were just going along for the ride.

Clearly, if Danny Wallace admired the work of Joey Skaggs as he said he did, he’d been missing the point of Skaggs’ work all along. Says Skaggs, “On principle, I choose not to be involved with frivolous shows like this, unless I’m hoaxing them, which is why I sent Savage in my place. My work is generally more complex, focusing on issues I believe are important. Sometimes it can take a year or more to execute a concept with actors, props, elaborate Web sites, and PR. But, I’m dependent on the gullibility of the worldwide media to help deliver my message, so I guess I should be thankful to Danny Wallace for his efforts.”

Host Danny Wallace, who recently hosted BBC2’s “How to Start Your Own Country” and published “Yes Man,” which was made into a film starring Jack Black, wanted Joey Skaggs to teach him a thing or two about hoaxing. Instead, he got hoaxed.

One must never underestimate the power of scriptwriters and editors to create victory where there really is none. Just ask President Bush and Tony Blair.

Skaggs is sanguine about his easy score. “What can I say? He said he wanted to learn about hoaxing… I simply obliged.”