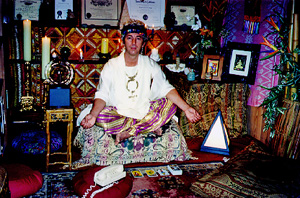 “Why deal with the legal system without knowing the outcome beforehand? Let me tell you whether to sue or settle, if you’ll win or lose. I use non-traditional techniques to determine the outcome of legal decisions.” Maqdananda, Psychology hic Attorney

For April Fool’s Day in 1994, to satirize the proliferation of both New Age psychics and ambulance chasing attorneys, Joey Skaggs wrote and produced a 30 second TV commercial in which he portrayed a psychic attorney called Maqdananda. The commercial aired 40 times throughout the last week of March on CNN Headline News in Hawaii.

Nobody questioned its veracity, even though the attorney, dressed like a swami, sits cross-legged surrounded by candles, incense and crystals.

Maqdananda asks, “Have you been the victim of a psychic injustice? Are you suffering from psychic surgery malpractice? Do you wish to re-negotiate contracts made during past lives?”

And finally, he says, “There is no statute of limitations in the psychic realm. Let me use my psychic abilities to help you rectify injustices of the past and present. No fee unless I win your case. Call me.”

The outgoing message on the answering machine said, “I knew you’d call.” Dozens of callers left messages. The machine collected all the incoming inquiries. None were answered.