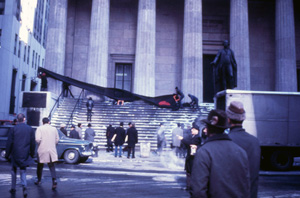 Francine Gottfried, an office worker on Wall Street, had very large breasts. When she went out to lunch, Wall Street workers would point, stare, whistle and hoot. Men stood on top of cars to get a glimpse. Francine’s efforts to go to lunch soon became national headlines as hundreds of male chauvinist pigs in suits gathered around her. This phenomenon was even covered on national television. 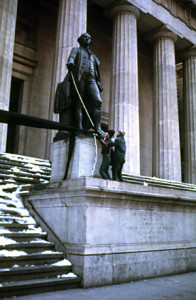 Joey Skaggs felt compelled to satirize this fixation on breasts. He decided to hang a fifty foot black brassiere, with two red hearts on each cup, in public.

His first thought was to hang it around the Statue of Liberty, but all attempts failed. He then tried to stretch it across the Wall Street intersection, but he was removed from a lamp pole, bra in hand, by police officers.

His third attempt was successful. During lunch on Valentine’s Day, with the help of friends, he tied one end of the bra to the outstretched arm of the statue of George Washington in front of the U.S. Treasury Building on Wall Street. He then stretched the bra across the front of the building and tied the other end to a column. When the flood of workers going to lunch saw what was happening, they became enraged. An angry mob attacked the bra and ripped it to pieces. Police officers arrived and arrested some of Skaggs’ friends, but Skaggs himself managed to slip away, narrowly averting a big bust.