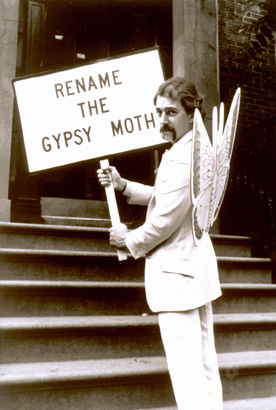 JoJo, the King of the New York gypsies, was really pissed off. A common agricultural pest, the gypsy moth (aka lymantria dispar), was causing a record amount of damage to hardwood trees in the Northeast. In 1981 alone, it had defoliated 12.9 million acres of forest. 1982 was worse and everyone was talking about it. Jojo and his people felt this was defamatory and they wanted the moth renamed. To bring attention to this plight, he formed a gypsy anti-defamation organization called Gypsies Against Stereotypical Propaganda, or G.A.S.P.. 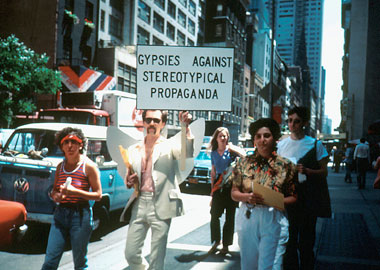 JoJo (a.k.a. Joey Skaggs) sent out a press release calling for a city-wide, week long gypsy work stoppage. No more fortune telling, and no more reading of horoscopes, tarot cards or palms until the group got some respect. He said, “Call it the Ayatollah moth, call it the Idi Amin moth, call it the Hitler moth. But never again the Gypsy moth.”

Clyde Haberman of “Metropolitan,” a frequent feature in The New York Times, fell victim to the piece after speaking with JoJo on the phone. His reportage actually mirrored the gypsies plight. It was condescendingly written for comic relief. The New York Post, upon learning it was a hoax, wasted no time pointing the finger at The New York Times in an article called “Times falls for the old switcheroo.”

Unfortunately for Haberman, this was not the first time he had been taken in by a good story and had it publicly revealed. As a young reporter, Haberman was a stringer for The New York Times. Assigned to cover the Columbia School of Journalism graduation ceremonies, he is said to have embellished his story with fictitious graduate awards that had sexual innuendoes. He was fired for this transgression and went to work for The New York Post. This episode is covered in Gay Talese’s book The Kingdom and the Power: Behind the Scenes at The New York Times: The Institution That Influences the World

. He had made his way back to The New York Times when he fell for the G.A.S.P. story.

The New York Times printed a five line humorless and curt retraction of the story.

39 years later, in 2021, The New York Times reported that the Entomological Society of America is changing the name of the gypsy moth and the gypsy ant because they are “offensive to a community of people.” This became major news and was covered around the world from CNN to RT.

Says Joey Skaggs, “As kids we were taught, when bullied, to say, ‘Sticks and stones may break my bones but names will never harm me’. But that’s really not true. Pejorative name-calling does cause harm, as does the deeply embedded prejudice behind it.

“For more than five decades, I’ve used guerrilla theatre and public access techniques to create ironically absurd situations so I can challenge preconceived ideas. I never in my wildest dreams imagined this satirical piece would materialize so specifically four decades later.”

As a side note, at the same time, the Cleveland Indians are changing their name to the Cleveland Guardians, and the Asian Carp is being renamed “invasive carp”.