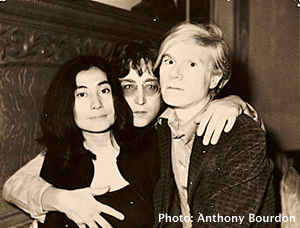 Charlotte Moormon was a performance artist. She played the cello. Topless. She was a wonderful, creative and loving person and a great friend to Joey Skaggs. Moormon is gone now, but her memory and her art live on. 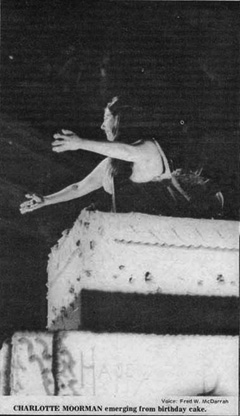 One of her many contributions to the New York culture scene was her creation of the Annual New York Avant Garde Festival. Free to the public, it was a forum for artists of all kinds to display, perform, or whatever, in some unique part of New York City. Thousands of curious and supportive art lovers would attend. It was a great creative scene. And Moormon managed to pull it off year after year, despite all kinds of public and private battles.

Moormon had invited Skaggs numerous times to participate. He agreed to perform at the 8th annual festival in 1971, held at the 69th Regiment Armory on Lexington and 25th Street. Moormon and Skaggs talked about what he wanted to do and she worked out the details.

Moormon and Yoko Ono were old friends and Moormon knew that Ono and John Lennon would be attending the festival. Skaggs had met Ono in Thompkins Square on Easter Sunday in 1966 when he erected his Crucifixion sculpture.

Skaggs called his piece Fame Exchange. He arranged for a throng of screaming admirers with cameras to greet him as he arrived by limousine at the opening of the festival at 12 noon on November 19, 1971. Unsuspecting on-lookers were amazed to see John Lennon and Yoko Ono arrive at the same time. But all the attention of the adoring crowd was directed at Skaggs, who was totally unknown to the most of them, not towards Ono and Lennon. This left the audience to ponder who that famous person was, underscoring Andy Warhol’s famous quote, “In the future, everyone will have their 15 minutes of fame.”