Trump’s Kool-Aid at the White House 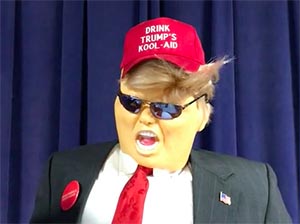 It’s October of 2018, just before the mid-term election, and we are in a world awash with divisive hatred and intolerance, voter suppression, blatant racism, tax cuts for the rich, exploitation of the environment, the undermining of public education and now a threat to our right to protest, all courtesy of President Donald Trump’s narcissism, lack of empathy and mis-use of power.

But hey… Drink Trump’s Kool-Aid and delude yourself. Vote against your own best interests. Vote against the interests of democracy and free speech. Vote against everyone’s right to choose the life they want to lead. 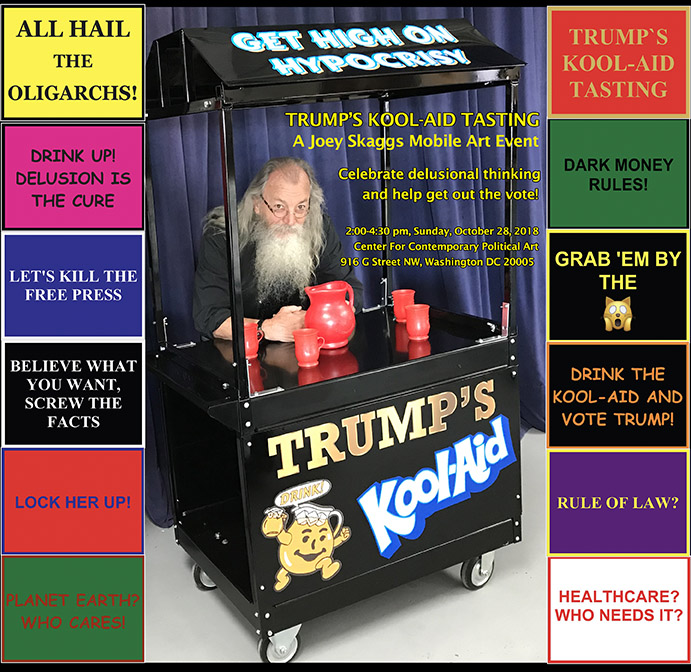 With the mid-term election looming, Americans need to vote for change. So, hoping to encourage people to do so, Skaggs and volunteers wearing Trump masks and holding signs underscoring Trump’s positions took Skaggs’ mobile Kool-Aid Tasting Stand from where it was on exhibition at the Center for Contemporary Political Art in Washington DC, to the White House. 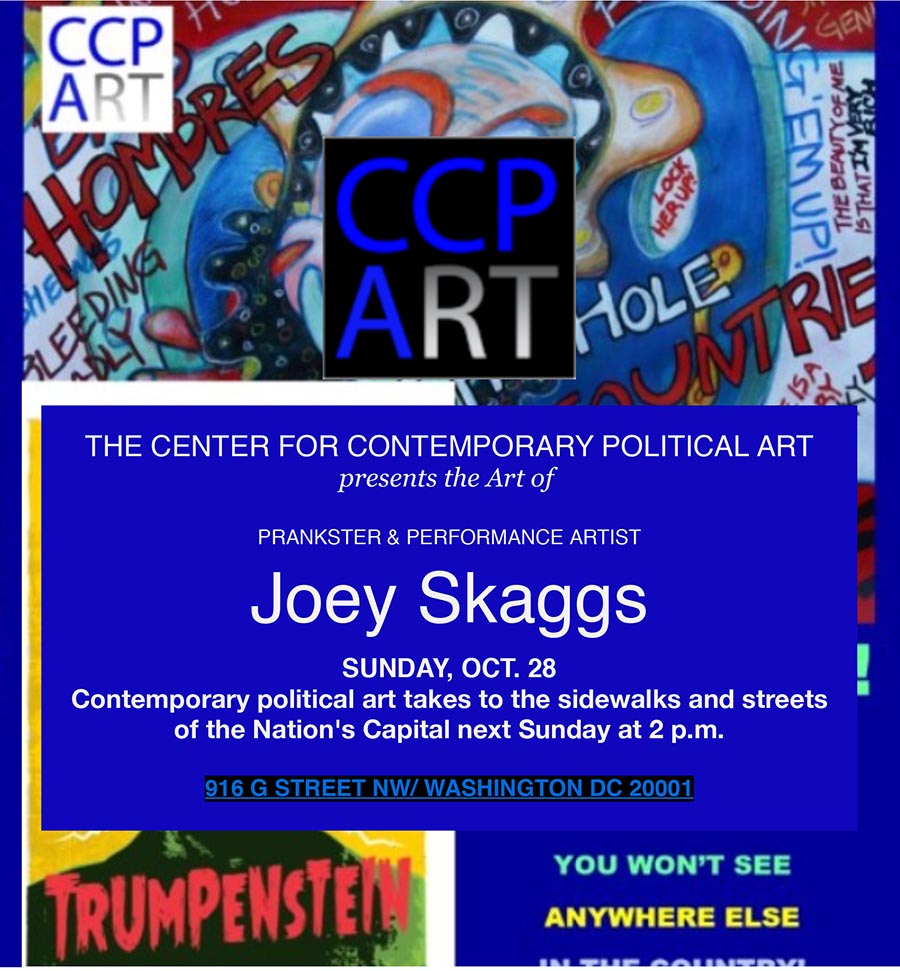 This was a faux pro-Trump parade, illustrating and satirizing what Trump represents to the American People. 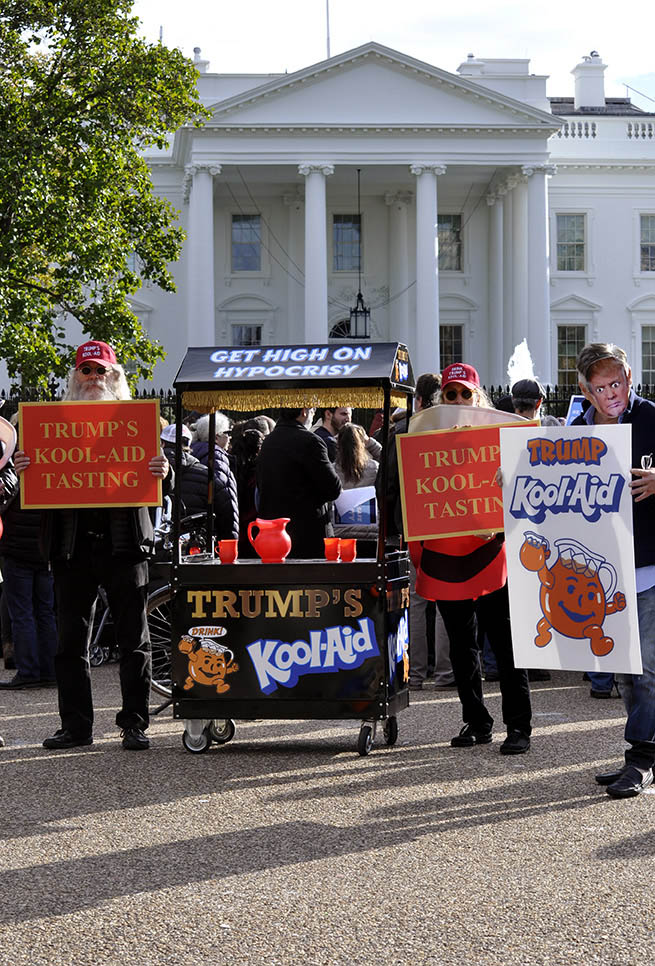 For over fifty years, Joey Skaggs has created outrageous in-your-face guerrilla theater using spectacle, shock, sensationalism, humor and irony to convey his thoughts. He believes this art form should be revered, not forbidden. If artists and activists no longer have the right to creatively dissent, the consequences to American democracy, however flawed, will be dire.

With this event, Skaggs’ purpose was to counter voter apathy and motivate people to turn out for the 2018 midterm election by reminding them not only of the countless lies perpetrated by this president, but the threat to our freedoms if he is not stopped.

Says Skaggs, “The world is full of propaganda. Knowing how you are affected by it and realizing you can work to change it can empower you to inspire and activate others. Say something and do something before it’s too late. If you have the vote, you have the power. Use it. We can make positive changes. Otherwise, we get what we deserve.”

Stand up for your rights while you still can! 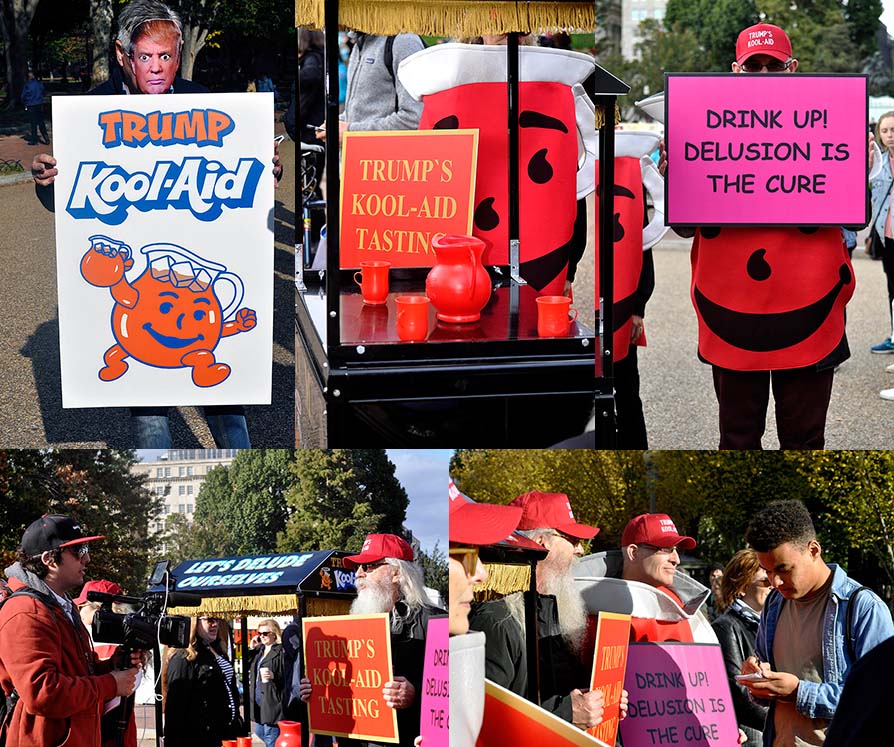