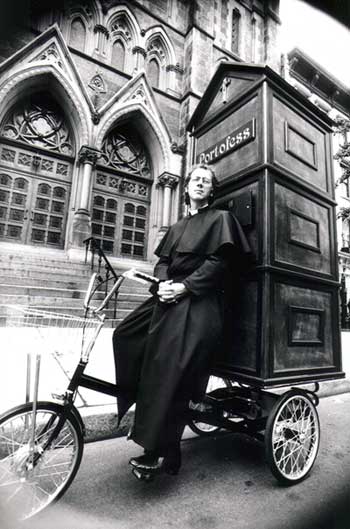 Joey Skaggs has been a doctor, a lawyer, an Indian chief. He ran a bordello for dogs, directed a celebrity sperm bank, and was the capo de capo of the Fat Squad, a paramilitary organization dedicated to wiping out obesity. His cockroach extract vitamin was invented to cure the world’s ailments, and he was the only man ever to windsurf from Hawaii to California.

These and many other achievements have been diligently reported as fact by domestic and international news media for over forty years. Yet every one of these so-called news stories was the creation of conceptual artist Joey Skaggs. His elaborately staged media hoaxes, which brilliantly satirize sociopolitical and cultural issues, have two overriding goals: to expose hypocrisy and effect social change.

Joey Skaggs’ unique brand of provocation resonates in the news media, affecting millions of lives around the world. His willingness to commit knowledge, energy, and resources to issues via his elaborately fabricated hoaxes inspires others to a deeper examination of their core beliefs and to create their own forms of social activism. Skaggs has lectured and conducted workshops on media literacy and media jamming across the United States and in countries as diverse as Australia, Brazil, Canada, China, France, Germany, Norway, Slovenia, and Spain.

A Skaggs appearance offers not only a rousing defense of freedom of speech but scores a knockout punch thanks to his showmanship. His genuine gift of storytelling, by turns hilarious and compassionate, never fails to win with audiences.

Organize a screening of ART OF THE PRANK movie and
bring Joey Skaggs to do a Q&A, lecture or workshop

Colleges & Universities, such as:

Festivals, Exhibitions, Conferences, Symposiums, such as: