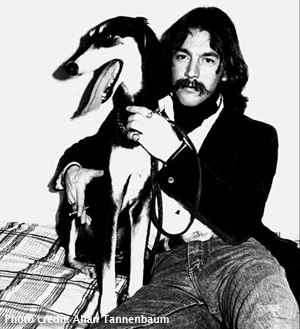 The phone rang off the hook as hundreds of people called to talk to New York’s first and only dog pimp. Surprisingly, not only were the calls from bona fide customers willing to pay $50, but just as many calls came from people wanting to have sex with dogs or to watch dogs have sex with people. Dog pimp, Joey Skaggs, recorded all of these incoming phone calls. 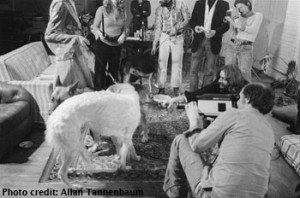 When contacted by the news media, Skaggs got together 25 actors and 15 dogs and staged an elaborate performance in a SoHo loft: A Night in a Bordello for Dogs. The performance featured models posing with female dogs in look-a-like outfits, and customers posing with the male dogs waiting to view the bitches. Friend Tony Barsha played a bogus veterinarian who, when interviewed, explained that the female dogs were injected with a drug called Estro-dial to artificially induce a state of heat. If a bitch was already in a natural state of heat, she would be given a contraceptive called Ovaban, so there would be no fear of fatherhood.

A lecture was given on dog copulation techniques and customers filled out questionnaires about their male dog’s age, medical history and bitch preferences. Hostesses served cocktails. A dog groomer primped the dogs before and after sex, and a staff photographer took a token photo of each dog getting it on. 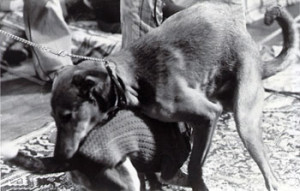 Video crew members representing Al Goldstein’s Midnight Blue, New York’s first late night TV sex show, appearing on Manhattan Cable’s Channel J, thinking they had shot every kind of sexual perversion known to man, were totally grossed out by the site of female dogs humped by male dogs for money. To assure that their viewing audience got the full impact, they got down on all fours and shot the humping dogs from a dog’s eye view. Of course, there was no actual copulation at any time. As any one who’s ever owned a dog knows, any horny male dog will hump space once his mojo kicks in.

The performance aired on TV and was covered in the press. This added to the public clamor and outrage. The SoHo Weekly News covered the story twice. During the second interview, a week after the first article had appeared, the writer suspected it was a hoax. But it was such a good story, he complied with Skaggs’ request to continue the ruse.

When WABC TV called, saying they wanted to do a documentary on the Cathouse, Skaggs granted them an interview in Washington Square Park, but refused to take them to the facility, saying he had gone underground due to harassment. He, instead, provided them with the previously shot video of the Cathouse for Dogs, after clueing in Alex Bennett, Midnight Blue producer, who gleefully went along with the hoax.

The WABC TV piece aired, painting proprietor Skaggs as a sleaze-bag dog pimp exploiting innocent dogs for money. This helped to enflame more authorities, including the ASPCA, the Bureau of Animal Affairs, the NYPD Vice Squad, the Mayor’s office, and various religious and humane organizations, who were thus compelled to send out a drag net to bring down the dog whoremaster of Greenwich Village. Finally, a subpoena from the Attorney General’s office, complete with $2.00 for cab fare, was delivered to Skaggs’ door.

On April 1, 1976, in answer to the subpoena, Skaggs called a press conference at the Attorney General’s office. He announced it was a conceptual performance piece, that the whole thing was a hoax. He was forced to give and swear to a deposition and the case was dropped.

WABC TV never retracted the story, leaving millions to believe that somewhere in New York City there still exists a bordello for dogs. When later asked about this, the producer insisted that Skaggs said it was a hoax to avoid prosecution. This may have been because the documentary was nominated for and subsequently won an Emmy Award for Outstanding Feature News.

The dog bordello was the subject of much debate in the media for a long time thereafter. The myth continues to this day. In a book called The Total Dog Book

, by Louis L. Vine, D.V.M., (Chapel Hill, North Carolina) there’s still a section that says that somewhere in Greenwich Village there is a cathouse for dogs.