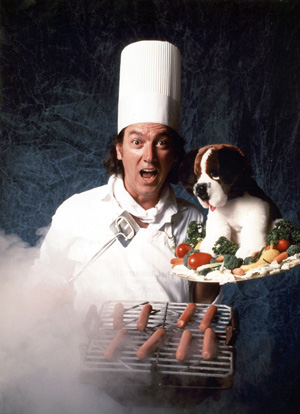 “Dog shelter kill million of dog, cost money…Dog shelter need money to operate. Where it get money? Hard to get money. Many people like to eat dog…Where do they get dog?…We buy all dog, regardless of size or color. We prefer big, young strong dog, but we take all dog from your dog shelter.”
Kim Yung Soo, President, Kea So Joo, Inc.

The outrage was instant. The Kea So Joo, Inc. telephone rang off the hook. The outgoing message on the company answering machine was in both Korean and English, and was punctuated by yapping dogs in the background. It couldn’t keep up with the incoming calls and faxes.

Then the letters began flooding in:

“I have informed animal activist organizations across the nation in regard to your repulsive letter of request. I’m hoping that some action can be taken against you and your countrymen for eating animals that are very beloved to Americans.”

“I may be able to excuse your bad English, but I cannot excuse your cruel business. People like you need to go back to your country and stay there.”

“I’d like to see immigration laws tightened so that people like you could not enter our country.”

“There are alot of problems in this country (U.S.A.) and people like you are the reason for most of them. You come over here and take advantage of all our benefits and then you try to shove your customs down our throats…You must have maggots running through your blood. Maggots eat the feces of all living creatures, you must have had a diet of this all your life to have turned out to be the most rotten of your kind…Because of you and your letter, I have made a commitment never to purchase or patronize anything from Korea, China, Philippines, Japan, Thailand, or Cambodia.”

“If you want Americans to try a different kind of meat, why don’t you go back to your home country and make a business out of selling your little dirty Asian babies to Americans as ground meat.”

“I hope everyone that agrees with your ideas are punished in a cruel and harmful way.”

“In America we have a serious need for human body parts. If you are disease-free, why don’t you kill yourself (commit suicide) and send your organs to the various charities in order that worthy humans may continue life on this planet.”

The return address on the letter was a copy shop/box rental storefront on MacDougal Street in New York City. Although Skaggs had mailed letters only to animal shelters, the recipients, with righteous indignation, turned theirs over to their local media. The media, in turn, reacted as if they were an arm of law enforcement.

Skaggs never answered a single call, fax or letter. Despite this, numerous television reporters stated they had spoken with representatives of the company. Others reported that large dogs were missing off the streets. Several stated that legal charges were being brought against the company. One reporter in Atlanta warned viewers not to send money to the organization. Another reporter stopped an Asian restaurateur on the street, showed him the letter, and with an accusatory tone asked him if he had ever seen the letter before. The man’s name and the name of his restaurant were displayed on the screen.

The copy shop was first besieged by journalists, then by health inspectors, police, and private investigators. Shop owner Abe and his assistant Rahul were in on the hoax. It was a real challenge for them to deflect the onslaught of angry people looking for Kim Yung Soo.

The response from the public was as biased as the media. There were numerous threats, legal and physical, against the proprietor Kim Yung Soo, as well as offers to sell dogs, which were blatant attempts to entrap him. The general tenor was that of horror and outrage that Asians actually cook dogs for human consumption. All sorts of allegations were made about the immorality of buying and selling dogs for food. 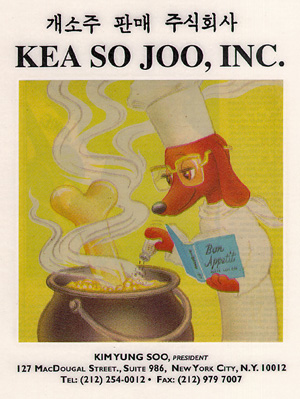 In fact, there was no Kea So Joo, Inc. (which in Korean means dog meat soup with alcohol). Nor were any laws broken. Skaggs orchestrated the hoax with help from several Korean friends plus his friends at the copy shop. His point was to illustrate the hypocrisy, intolerance and prejudice harbored by so-called animal rights humanitarians, as well as gullible media who freely express their racism and cultural biases.

When police investigators finally connected Joey Skaggs to Kea So Joo, Inc., they assumed he was a broker for the Koreans. So the clamor moved from the copy shop to the outside of Skaggs’ apartment at 107 Waverly Place. Agents climbed up on the roof to see if they could spot dogs in pens in the back yard while haters milled around outside. For his own safety, and so he could record the flood of incoming phone messages, he stayed inside with the windows covered, leaving only to get something to eat by climbing over the fence from his backyard to his neighbor’s apartment and exiting from there to the street.

On a lighter note, about a month later, after things calmed down, friends Clark and Diane Whelton invited Skaggs to brunch with former Mayor Ed Koch. When told about the hoax, Mayor Koch called the Kea So Joo, Inc. phone number and left this message:

On Sunday, July 17, 1994, an exposé written by journalist John Tierney, who had followed the Dog Meat Soup hoax behind the scenes from beginning to end, was published in The New York Times Magazine. 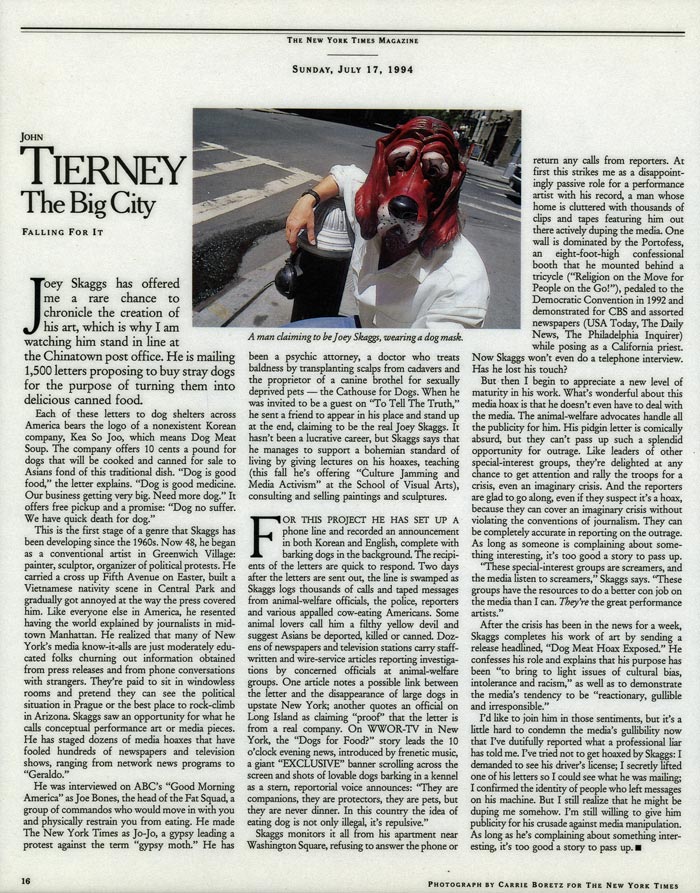 The full ABC TV 20/20 interview is in Videos, which can be accessed in the main menu.