Windsurfing from Hawaii to California 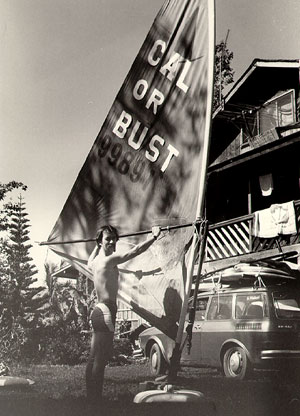 Windsurfing from Hawaii to California

On January 15, 1983, at 12 noon, Hawaii windsurfer, J.J. Skaggs (a.k.a. Joey Skaggs) set out to become the world’s most famous windsurfer. His objective was to become the first person to cross the Pacific Ocean on a sailboard. A crowd gathered at the Hanalei Bay Pavillion on the beautiful island of Kauai. A rock band played. A Kahuna blessed the voyage. Food was served. In the crowd were several reporters and three video crews, all invited to witness the launch.

The crowd bade him a fond farewell as he jumped onto his board and broke over a crashing wave to begin his 2,397 mile voyage (as the albatross flies) across the deep blue sea and into the history books.

J.J. wore a backpack in which he carried water, some tiger milk bars, a couple of cans of Dinty Moore Beef Stew, a compass, a fishing pole, a radio and some navigation charts. Not much for such a long and dangerous trip, estimated to take over 30 days in seas with over 40 foot waves. The decal on his board sail said CAL OR BUST. 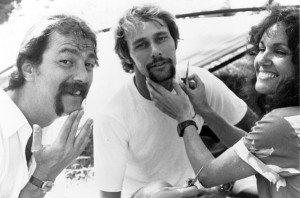 Just one problem, J.J. or Jay J. or James J. or Jim J. (all these names showed up later in media coverage) was not who he said he was. He was actually J.J. Jones, who was indeed a world class wind surfer. His hair and mustache were cut to match Skaggs’.

The crowd cheered as J.J. sailed out to sea. A video crew in a zodiac boat followed him out of the bay into the ocean on his way to California. Once he was out of sight the reporters left. By that time, unbeknownst to them, he had successfully rounded the point and made his way to a local bar to secretly rendezvous with Skaggs and friends.

The story hit the UPI wire service and was picked up all over the country. Various television news stations from Honolulu to Denver covered the event.

For about a week, local folks talked about that crazy windsurfer. No one had heard from him or about him. After a while, there was talk of a Coast Guard rescue mission. With that news, Skaggs decided it was time to expose the hoax.

UPI and the TV networks never ran retractions. But local reporters who had fallen for the story reported that the stunt was a hoax.