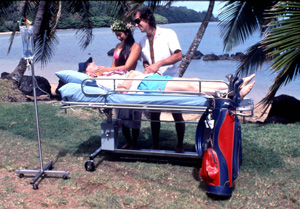 Tired? Feeling stressed? Need a vacation, but haven’t got the time? Or, perhaps you have concerns about the dangers of air travel or political unrest. Maybe you just need a vacation from your vacation, because it’s never really relaxing enough. In the Fall of 1990, German anesthesiologist Dr. Joseph Schlafer (a.k.a. Joey Skaggs) said he had a solution. It was called Comacocoon.

Dr. Schlafer (“sleeper” in German) mailed out 1,500 letters with an accompanying brochure and questionnaire to the press. The letter appeared to be part of a market research project for his new medically enhanced comprehensive dream vacation concept, which was designed to combat the ever increasing risks of traveling away from home as well as the negative impact of tourism on the environment. In actuality, the letter and brochure were sent only to the media. 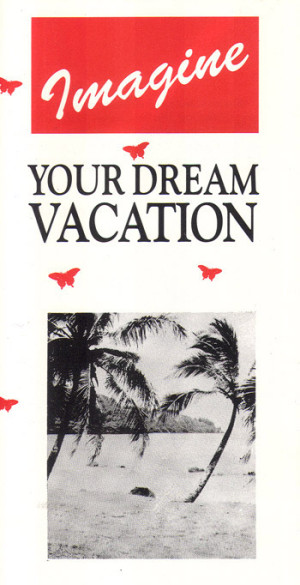 Utilizing a revolutionary and totally safe pioneering BioImpression(tm) computer system, the company would, at its New York City facility, provide a state of total suspended animation and intensive, concentrated regeneration through anesthesiology and subliminal programming. The company guaranteed complete relaxation while the client’s imagination was guided to their destination of choice. Clients could simultaneously quit smoking, lose weight, learn to speak a foreign language, and go home with a tan.

The brochure, which sported a photo of an anesthetized client on a gurney under palm trees by the beach, announced the trademarked BioImpression computer system and offered options such as behavior modification, environmental cleansing, nutritional rejuvenation, skin care, fitness and body toning.

Vacation packages included the Sleeping Beauty (the weekend special), Gulliver’s Travels (the week-long version) and the Rip Van Winkle (2 full weeks of bliss). One could choose from an inventory of journeys including, the Magical Mystery Tour (where you could be a rock star on a sellout concert tour), the Thrill Seeker (to ride the rapids of a selected adventure), the Don Juan (for the lady’s man), the Mata Hari (for the woman seeking romance and adventure), the Time Traveler (a Jules Verne fantasy) and the Stop-the-Clock (no frills, no extras, just deep penetrating rest). The Honeymoon Tour was particularly enticing. Each bride and groom could have the honeymoon of their dreams, all the while believing their partner was having an equally good time. 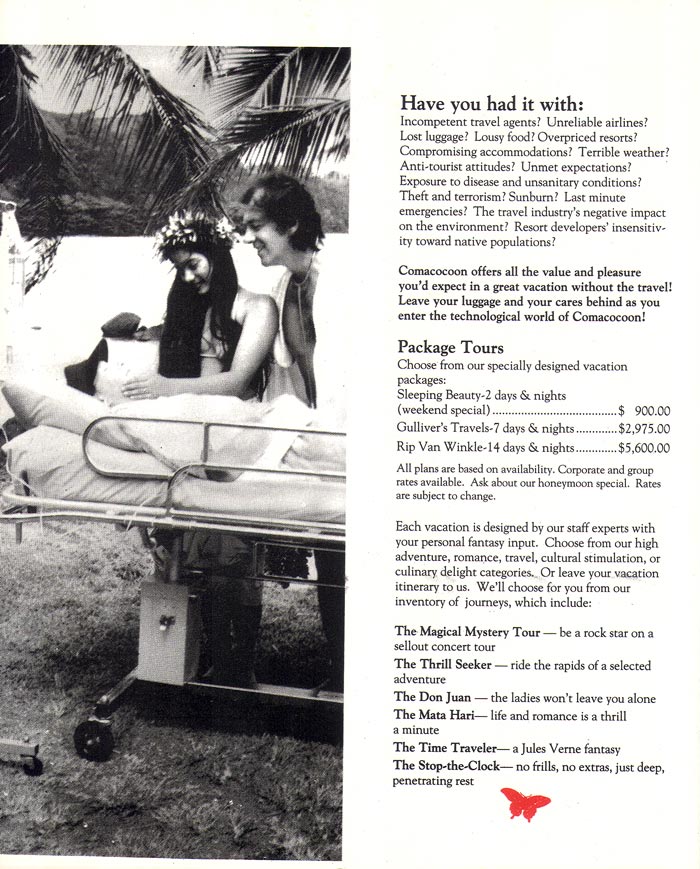 The accompanying market research, to assist the company in better servicing its clients, asked multiple choice questions such as:

Q: How has the news media affected your thoughts about personal safety and environmental concerns? A: Has made me less concerned; Has had no effect on my feelings; Has made me more concerned.

Q: Where do you feel least safe? A: Major metropolitan city; Foreign country; In an airplane; In a car; On a boat.

Q: On your next vacation, where would you like to go? A: A tropical island; A foreign country; Outer space; Back in time; Forward in time; Other.

Q: While on vacation would you like to A: Have a total absence of mental stimulation? Learn a foreign language? Read the classics? Lose weight? Have cosmetic surgery? Undergo behavior modification such as quitting smoking?

Q: On your next vacation, would you like an imaginary romantic encounter? A: No; Yes; with a member of the opposite sex; Yes, with more than one person; Other.

The Comacocoon office was manned by actors fielding calls from journalists pretending to be clients wishing to visit the facility. Requests for appointments were politely deflected for several months due to the supposed overbooking of the facility. All phone conversations were recorded and logged and the ensuing press coverage was collected.

When Dr. Schlafer refused an interview request by the Globe (a weekly supermarket tabloid), the paper instigated an investigation, alerting pertinent New York City authorities and the police to what they thought might be a front for the sale of hallucinogenic drugs.

The first raid was conducted by gold shield-bearing detectives from the New York Office of Professional Discipline. They were highly suspicious of the Comacocoon operation after having spent days trying to locate the office. In fact they had raided the wrong premise due to a telephone company error in the phone listing. After listening to compelling evidence for over an hour, and seeing that Skaggs was actually conducting two hoaxes at once, with the Hair Today Ltd. hoax stationed across the room, the officers not only believed Skaggs’ story, but offered him a job teaching detectives how to recognize scams. It was they who told him about the Globe‘s allegations. 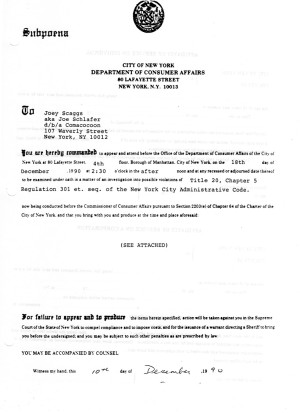 The hoax continued, only to be interrupted a second time by a subpoena from the Department of Consumer Affairs, headed by Mark Green, who, coincidentally, had been the subject of another Skaggs hoax, Bodyguard to the Stars, four years earlier. The subpoena alleged 17 charges. Dr. Schlafer, was asked to provide answers to questions such as: names of all drugs used to facilitate sleep-dream cycles and dates of FDA approval of such drugs; documentation relating to the infusion systems, supporting the claims that such therapies have been approved and thoroughly tested as safe and effective; and documentation of any and all benefits derived from the computer directed BioImpression System.

Skaggs, accompanied by an attorney and several actors and journalists, cheerfully answered the subpoena, revealing Comacocoon to be a hoax — much to the chagrin of the Department of Consumer Affairs.

When interviewed by The New York Times, Skaggs said, “As Joey Skaggs, I can’t call a press conference to talk about how the media has been turned into a government propaganda machine, manipulating us into believing we’ve got to go to war in the Middle East. But as a media jammer, I can go into these issues in the process of revealing a hoax. Comacocoon had nothing really to do with dream vacations. It was about mind control. I’m making a statement about how easy it is for governments and big business to pull the wool over our eyes.”