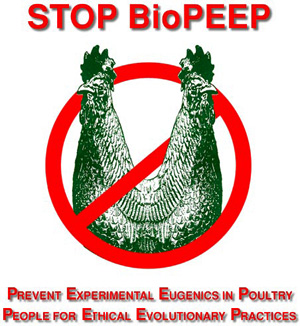 In July of 1996, Joey Skaggs went to Australia to visit friends in Sydney before heading to Brisbane to lecture at the University of Queensland. Before traveling, he contacted a journalist friend, to let her know he was coming. Without his knowledge, she alerted the media and booked him for interviews with “Today Tonight”, 2BL Radio, ABC National Radio “The Media Report” with Agnes Warren, “The Hub”, Arena Cable TV, the “Breakfast Show”, Adelaide Radio with Julia Lester, Midday TV, and The Age newspaper.

One of his friends, an American artist with a mission to satirically photograph peeps (the little marshmallow chicken shaped candies) all over Australia, pleaded with him to get a peep on national television so she could photograph the image on her TV. Not having any idea how he would do that, he agreed.

During the interviews, journalists asked questions about his past media hoaxes and pressed him to explain why he was in Australia. The Age printed two warnings announcing that Joey Skaggs was there and was planning to hoax the media. He had no such plans for this trip, however he had been developing an as yet unnamed international hoax about genetics. When repeatedly asked for a clue to his next hoax by Kerri-Anne, the host of “MidDay with Kerri-Anne,” he replied, “Peep. The clue is Peep—P E E P.” This made no sense, but it made his friend very happy.

After the lecture at the University of Queensland, several students said they’d like to work with him on a future hoax. Each was a doctoral candidate with interests ranging from genetics to mathematics to the psychology of addiction. They were a perfect match of talent for the new hoax he had in mind.

When he returned to the U.S., he received a detailed email from the genetics doctoral candidate who said, in effect, “If this is what you want to do, here is an idea how to do it.” Thus began a lengthy e-mail correspondence as the hoax took shape.

Other players joined the group. A journalist joined after Skaggs’ presentation as artist-in-residence in Media Literacy at the Taos Film Festival. A Slovene mathematician joined after hearing Skaggs lecture on media responsibility for the George Soros Open Society Institute in Llubjana.

A New York friend took clandestine photographs of both a research facility and a nearby chicken farm.

A California friend took photos of a hospital bio-containment unit in San Diego.

Two others in Hawaii provided expertise in market research and graphic design. Another in San Francisco designed the logo.

Skaggs retrofitted the name of the hoax to match what he had announced on TV in Australia. BioPEEP (Biological Protocol for Enhanced Economic Production) became the code name for the top secret research project purportedly commissioned by an unnamed multinational corporation to genetically alter and irreversibly addict human beings who unknowingly consumed their products.

The addiction was caused by an embedded virus genetically engineered to permanently alter the DNA structure of the host.

This addiction-causing material would create “human consumer product junkies,” thus assuring this multinational corporation total market dominance. In other words, if the company was a cola company, the consumer would become addicted to that specific brand and no other. The virus was to be released at the Sydney 2000 Olympics ensuring a global epidemic of buyers.

Tens of thousands of chickens at an unnamed Queensland poultry facility were bred, tested, and slaughtered until scientists isolated the exact genes of addiction.

A gene sequencing laboratory in Santa Fe, New Mexico, a super computer in Ljubljana, Slovenia, and a marketing firm in Hawaii supported the project, with cooperation from Germany, Italy, France, and England.

At the point of successful isolation and testing on humans, the research was co-opted by the U.S. military for use as a biological weapon capable of eradicating DNA targeted populations through their use of consumer products. For example, entire populations of Africans, Asians, Muslems or Jews might become “addicted” to a virus-laced toothpaste which was a ticking time bomb.

While the military worked on an antidote to the virus to protect their allies, they planned to continue the economic protocol for profit and gain. All the scientists were offered elaborate incentives and stock options to assure their loyalty to this top secret project.

Skaggs launched the hoax by mailing press releases and letters from Australia to the international media under the assumed name of Dr. Joseph Howard, claiming that an employee of BioPEEP, who decided he could no longer live with his conscience, had provided stolen documents and clandestinely taken photographs.

Howard, an international humanist living in Brisbane, Australia, had created a human and animal rights group called People for Ethical Evolutionary Practices (PEEP), and launched a campaign called Stop BioPEEP to alert the world about the imminent threat of BioPEEP’s research. Their slogan was Prevent Experimental Eugenics on People.

The defector’s information was made available to the world media on an elaborate website, http://www.stopbiopeep.com. Pages and pages of letters, e-mails, charts, graphs, marketing studies, photographs, and scientific data were mounted on the site to help convince the media that military defense assets were preparing for “gene-ocide,” a new war tool capable of massive devastation to the human ecology when used as a preemptive strike.

In addition, PEEP held public rallies, first on International Human Rights Day, December 10, 1997, in Brisbane, Australia, and then on January 27, 1998, in front of the United Nations in New York City. Demonstrators wore t-shirts with a two headed chicken logo and carried protest signs.

As global as this hoax was in it’s concept and execution, the media responses to the press releases and website were also global. Although there is no way of knowing how much ink this hoax received, Skaggs is thus far aware of headlines in The Australian, a national newspaper, which reported on Wednesday, December 10,1997, “Genetic conspiracy turns to fowl play,” and in the New York Post on Saturday, January 3, 1998 which exhorted, “Zealots cry fowl over flu slaughter.” As an aside, the People for Ethical Evolutionary Practices had not claimed any connection to the Hong Kong chicken flu. In addition, the demonstration at the U.N. was announced on U.P.I. and A.P. wire services. The Stop BioPEEP website received hits from the military addresses all over the world.

The New York demonstration took place on the same day as President Clinton’s 1998 State of the Union address, which was right in the midst of the largest media-propelled sex scandal of any presidency. Skaggs’ media hoax coincided with an extraordinarily surreal and over-the-top display of media irresponsibility. There was very little ink left for any other stories, real or otherwise that day. This made Skaggs’ effort to get his message out even more challenging.

While the BioPEEP scenario is imaginary, it is quite plausible. In fact, the capability for product addiction and “gene-ocide” may already exist. STOP BioPEEP was a complex performance piece that touched on many issues that face humanity and that deserve serious contemplation, such as:

When asked for his thoughts on this, Skaggs said,

“It’s becoming more difficult to satirize reality as we have become a tabloid society. It seems that a growing majority of the news media would rather sell a story based on speculation than search for the truth. This is of course is how I’ve been so successful with my hoaxes over the years. But these last few weeks have really proven my point. And, ironically, the speculative story of Clinton’s sexual activity was a far bigger story than my speculative story about a new secret genetic weapon. It’s hard to compete with reality.”