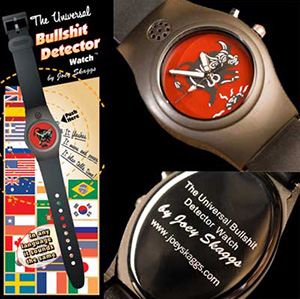 In 2005, Joey Skaggs created a non-partisan and non-sectarian tool to combat spin, hype, propaganda, and general bullshit. It’s the Universal Bullshit Detector, a watch with a cartoonish graphic on the face of a bull taking a shit. With the push of a button, the watch flashes, moos and makes a pooping sound. It also tells time. With this satirical product, he set out to empower people to speak their minds and make humorous social commentary any time, anywhere. Says Skaggs, “In any language it sounds the same. When asked ‘What’s that sound?’ just say, ‘Oh, sorry! You set off my bullshit detector.’”

Launched in 2006, the watch has proven endlessly useful, attracting fans and admirers worldwide. One journalist called it “the greatest invention since sliced bread”. 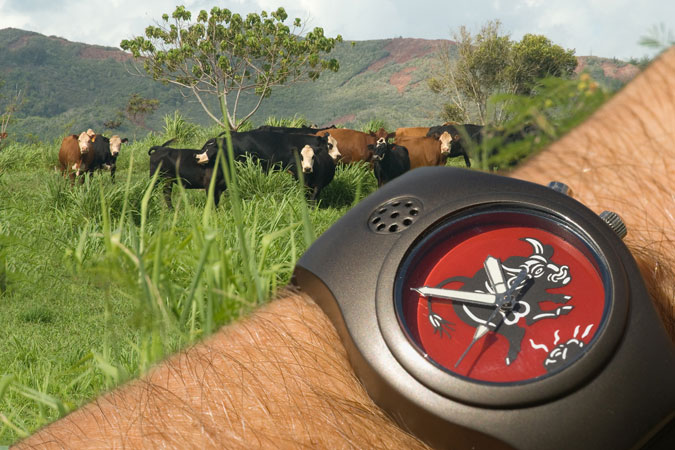 The Universal Bullshit Detector Watch is available for $19.95 (free U.S. shipping) in the Joey Skaggs Shop.

How Bullshit Detector Watch came to be:

The back story is amusing: Not finding a watchmaker in the U.S., Skaggs decided to shop elsewhere. Living part time in Hawaii, he had the opportunity to partake in a cultural exchange and business development mission managed by the Hawaii Department of Business Economic Development and Tourism (DBEDT). Working with the China Council for the Promotion of International Trade (CCPIT) and other government agencies, DBEDT set up matchmaking meetings in China with companies interested in doing business with Hawaii businesses.

Before the trip Skaggs filled out a form describing what type of business relationship he was seeking. He pondered about what to put down on the application. That he’s an internationally known artist, satirist and prankster? That he uses art as a means to criticize disinformation, hypocrisy and spin in the news media, government and big business? That he has intentionally hoaxed the world press on numerous occasions by promoting fake stories to make his point?

As a bonus, Linda Lingle, the Governor of Hawaii, was accompanying this mission. Would her administration relish the idea of her traveling with an internationally notorious satirist and prankster? Skaggs was intentionally vague about his past, and focused mainly on the contacts he wanted to make.

DBEDT provided Chinese student interpreters to assist with communications. Skaggs met with his interpreter. She was an English major but had a hard time understanding his work. She called her boyfriend and they had an animated conversation. He looked up Skaggs on the Internet and explained over the phone what he was seeing. When she finally got it, she burst out laughing and told Skaggs how happy she was to work with him. One huge hurdle conquered.

The Hawaii business people were ushered into a hotel conference room. Each had a table assigned with their name on it in English and Chinese. There were more people waiting to see Skaggs than he could ever have imagined. One was Chen Jia Chang, an 82-year-old highly venerated watch designer and engineer. He very proudly showed Skaggs his resume along with a catalog and list of his awards. He then brought out five books he had authored on the subject. He spoke English but he mostly chose not to and brought a few young people with him to help interpret. Once he finished telling Skaggs about his work, he asked what he could do for him.

It was the moment of truth. Skaggs didn’t want to offend him, so he carefully explained who he is and what he does and then gave him some examples. He told him that in his country he is a known artist and satirist and uses his work to inspire people to question unquestioned social values. The watchmaker’s brow was furrowed as Skaggs described the Cathouse for Dogs (an establishment where you could get your dog sexually gratified) as an example. He explained that it was not true, but that the world believed it until he revealed it was a hoax. His purpose was to show how gullible people are in believing everything they see in the news media.

Here was an eminent designer in his 80’s who had lived through the Japanese Occupation, World War II, Mao and the Cultural Revolution and now Chinese capitalism. Try as they might, the interpreters could not get Chen to understand. They were laughing, but he was struggling. So Skaggs showed Chen a web site with mock-ups of his series of satirical watches. When they got to the Universal Bullshit Detector Watch, he stared and stared and stared. Then he threw up his arms in the air and shouted, “Genius!” They were home free.

From that point on, Chen became the best ally Skaggs could hope for. They worked together through challenge after challenge and delay after delay until well over a year later they finally had invented a fully functional prototype. Neither of them had dreamed it would take so long, but the journey was well worth it, and both were proud of the outcome.

The Universal Bullshit Detector Watch has endless uses and the batteries are replaceable. For instructions see the link in the documentation section below.