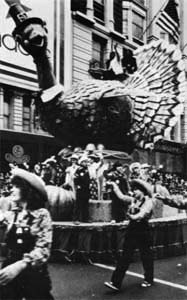 To follow-up Joey Skaggs’ Thanksgiving Dinner performance at the United Nations Plaza in 1981, the next year he and friends took giant photos of starving children to the Macy’s Day Parade and set them up along the parade route. This was a provocative gesture that caused much heated discussion along the way. When the master of ceremonies, Sammy Davis Jr., rode by on a float he made a raised fist salute to Skaggs.