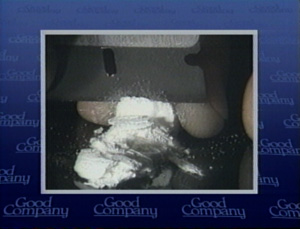 Joseph Adore was born in Brooklyn, New York, in 1945. His father owned a fish store on Greenpoint Avenue. As a young boy, Joseph worked for his father. Of course he was only a child, but because he had a special talent, his father depended on him. Joseph could smell like no one else could smell. He had an extremely acute olfactory sense. So, he could always tell his father exactly how fresh the fish were.

One would think this was fun, but actually it was quite unpleasant for young Joseph. He could never escape from all the unpleasant smells in his environment.

One day, Joseph’s mother wrote a letter to the federal Drug Enforcement Agency (DEA) advising them that her son was quite gifted and could help them in detecting drugs and explosives. Joseph was called in and tested. He beat all the trained canines hands down. So Joseph became an undercover agent for the U.S. Government.

In 1987, Joseph (a.k.a. Joey Skaggs) was invited to be a guest on a radio talk show in Palm Beach, Florida. They wanted to discuss his abilities and how he was personally responsible for more drug busts than any DEA agent in history.

For over forty five minutes, Joseph elaborated on his childhood and his professional career. He then took live calls. The calls were a bit unsettling, as the radio station was right in the midst of South Florida, one of the drug capitols of the world. One caller asked how close Adore had to be before he could detect cocaine or marijuana.

As Adore/Skaggs left the studio he realized his life could be in danger so he exercised great caution, continuously looking over his shoulder to make sure that no paranoid drug dealer was following to do him harm. Skaggs had planned to continue this hoax indefinitely, but decided not to. He preferred to keep his nose clean and out of that dirty business.

He did, however, appear on Good Company, a day-time talk show in the Northwest, as Joseph Adore. But this time, after showing his olfactory prowess by selecting one out of three suitcases packed with oregano (as a stand in for marijuana), he let the audience in on the hoax, proving how easy it is to fool an unsuspecting television audience.