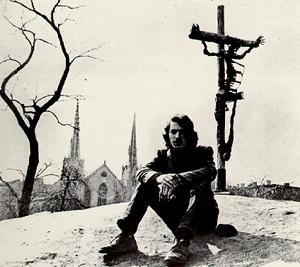 Joey Skaggs created a two hundred pound sculpture depicting a naked rotting skeletal corpse with a human skull, a barbed wire crown of thorns, long human hair, and a metal penis dangling between the legs, to protest the hypocrisy of the Church and man’s inhumanity to man. He attached it to a ten foot tall cross made of telephone poles. Casts of his own hands and sculpted feet were pierced by railroad spikes, attaching the body to the cross.

Early Easter morning, Skaggs and an entourage of friends dragged the Crucifix to the top of a barren knoll in Tompkins Square Park on the Lower East Side in New York City. The Crucifix was eventually attacked by irate on-lookers and partially destroyed. Skaggs was confronted by police and City Parks officials and was summonsed. He had to appear in court to answer charges of violating City Park regulations where he was fined and released. 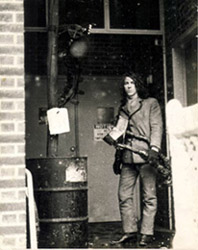 The Crucifix sculpture was shown at a New York University exhibition called Angry Artists: Artists Against the War in Vietnam. During the exhibition, the piece was taken down, broken, and placed into a 55 gallon trash can. Skaggs was told by NYU officials to go get it. When he went to retrieve it, he was thrown down a flight of stairs by two NYU guards who were offended by the piece. Skaggs threatened a law suit. NYU had a hearing and apologized.

After repairing it, he took the sculpture to Central Park and erected it during a “Be-In” held on Easter Sunday. Skaggs and the sculpture can be seen in this clip from the film “Ciao! Manhattan.” As Edie Sedgwick, the star of the film, climbs (or rather is pushed) up the rock to where the Crucifix sculpture is standing, Skaggs, on the far left, reaches out to help her.

Skaggs erected the Crucifix again in 1968 at the Central Park Easter Be-In which had become a peace rally. An estimated 90,000 people were there. Martin Luther King, Jr. had been assassinated ten days earlier. His wife, Coretta Scott King spoke in his place.

Anticipating future trouble, assuming the Crucifix would be damaged for a third time the next time he took it out, he built a duplicate copy. It was the duplicate that he carried into the Easter Parade on 5th Avenue the next year. 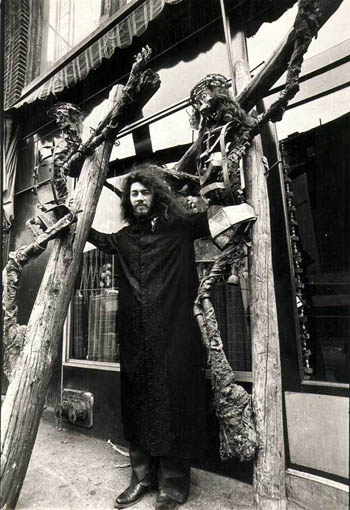 Skaggs dragged the Crucifix sculpture through the Easter Parade up Fifth Avenue to the doors of St. Patrick’s Cathedral. As he turned towards the Cathedral, the doors slammed shut and the police converged around him. People in the crowd shouted “Kill him, kill him,” and police officers kicked the cross into his back. They then made him drag it around the corner to a paddy wagon, all the while threatening, cursing, and kicking him.

The Crucifix fell to the ground and police officers stomped it to pieces. Skaggs seized the opportunity to bolt down the block to Madison Avenue where he jumped into a taxi and escaped. Having anticipated such a problem, he kept the original sculpture in tact for perhaps another day.