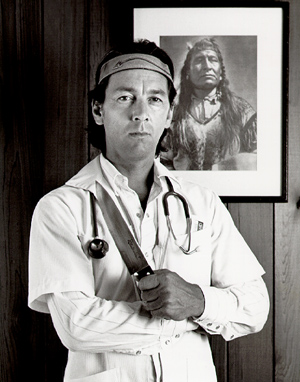 In the Fall of 1990, Joey Skaggs launched two hoaxes simultaneously. As Dr. Joseph Schlafer, he was marketing Comacocoon, the perfect vacation alternative. As Dr. Joseph Chenango, a Native American surgeon, he launched a new permanent cure for baldness — scalp transplants from cadavers. He called it Hair Today, Ltd.. Skaggs’ studio at 107 Waverly Place in New York City served as the telephone command post for both hoaxes.

Dr. Chenango was soliciting scalp donors with no history of male pattern baldness who worked in high risk occupations, such as electric linesmen or big game hunters. These, he reasoned, would make suitable donors in the event of their untimely death. He was also soliciting new scalp recipients–people wanting to undergo a scalp transplant.

He promoted his nationwide search with a brochure designed in the venerable style of the ubiquitous, but highly questionable, hair growth companies. He mailed it to 1,500 journalists as if they were potential clients. The brochure had “Before” and “After” photos of satisfied clients, however, there were only three styles of healthy heads, all of which looked like the good doctor’s grandmother’s wigs. 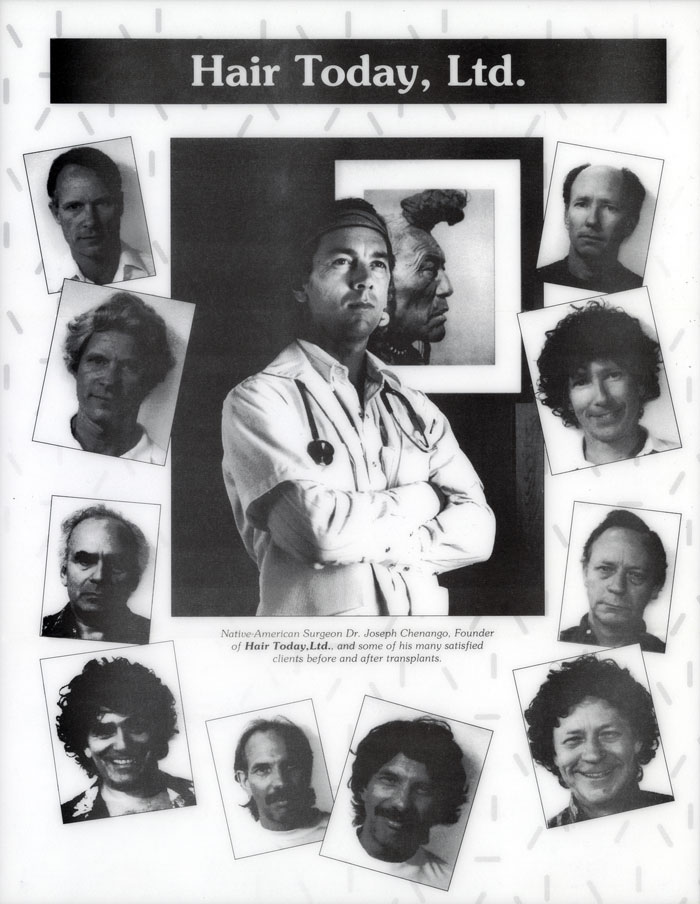 Enclosed with the brochure was an ad made to look like it had appeared in The Village Voice (it hadn’t). The ad said “Wanted: Healthy Scalps…”

Also included was a questionnaire with a diagram for prospective clients to draw in their hair lines.

The questionnaire asked such questions as:

For potential recipients, the questionnaire asked:

Hundreds of phone calls, letters, and faxes were logged. When the hoax was revealed, there were many very disappointed people.

“When I spot an alleged cure for baldness, I take note. You would too if every time the sun shone you had to wear a baseball cap, which can be pretty embarrassing at dressy outdoor affairs…”

And, said Mike Barnicle from the Boston Globe,

“Each and every morning of my life, sad but true, a little more of me goes right down the drain. That’s why I got so upset the other day after reading in the newspaper that Dr. Joseph Chenango was a total fraud…I placed my trust in Dr. Chenango. I believed him because I wanted to and needed to believe him. Like a host of others, my hairline has receded so badly that the top of my head resembles the landscape near Kuwait.”