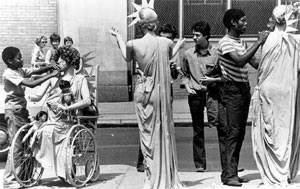 In 1969, the war in Vietnam was escalating. Joey Skaggs watched it on TV every night. He was angry. Angry at the U.S. government for being involved. Angry about the killing and maiming of innocent people. Angry at the soldiers his age who had allowed themselves to be used as pawns — who became a part of the insanity.

In no way was Skaggs willing to go to Vietnam to kill “gooks.” He managed to get a 4F draft classification, which was a total disgrace for his family. But, it was easy for him. The draft board thought he was crazy.

He and others like him paid dearly for their beliefs and protestations. Many were disowned by their families. Many were branded cowards by the government and the media.

But Joey and his friends thought it was the other way around. The proponents of the war were the cowards. To him they were morally, ethically, and politically depraved.

To try to be heard, he joined in protests and created his own public events. To many he was just a self righteous asshole. He didn’t care. He believed there was a better way of dealing with problems than annihilating each other. And he wanted people to be stopped in their tracks, to think.

On the 4th of July, 1969, with the help of friends, Skaggs erected four obscenely grotesque sculptures of the Statue of Liberty at Cooper Square in the East Village. They were life size mannequins painted green and wrapped in barbed wire. One was in a wheelchair. Several were holding dismembered baby doll bodies instead of torches. 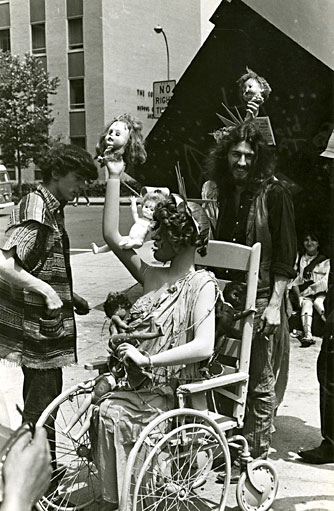 Paul Krassner, editor of the Realist, had photos taken, which he later used for the photo on the back cover of his book, “How a satirical editor became a Yippie conspirator in ten easy years

Skaggs watched as local kids stuck fire crackers in the statues and blew them up, which he decided was a fitting ending to a piece that symbolized the totally unconscious behavior fostered by hatred and war.

It took a long time and a lot of bashed heads before anti-war efforts worked. But they eventually had an impact. And although the end to the war in Vietnam was probably brought on more by political embarrassment and economics than by humanitarianism, public sentiment about it had changed in a palpable way.

Not that there’s room for too much optimism. Public sentiment swayed right back when the U.S. engineered a war in the Middle East to protect its petroleum interests. None-the-less, the 60’s offered an unprecedented opportunity to the brave and hardy to make a new kind of noise and get noticed.