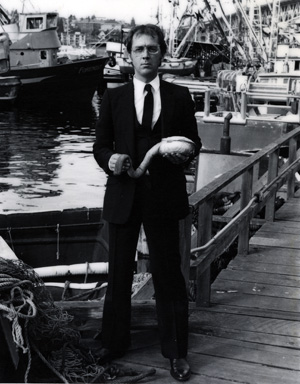 “The Geoduck is threatened with extinction due to a voracious international appetite for aphrodisiacs” Quote of the week in U.S. News and World Report.

The Chernobyl nuclear disaster had far greater consequences than are commonly known. Nuclear radiation contaminated the lichen eaten by Lapland reindeer, rendering their antlers unsuitable as an aphrodisiac for the insatiable Japanese market. Looking for an alternative, the Japanese turned to the geoduck (pronounced gooey-duck), a giant mollusk indigenous to the Puget Sound in the Pacific Northwest. The geoduck, which can live for up to 165 years and obtain a weight of up to 15 pounds, has a large appendage which protrudes from its shell through which it takes in nutrition and with which it moves through the water and sand. The Japanese turned to the geoduck as an aphrodisiac because of its extraordinary muscular elasticity. 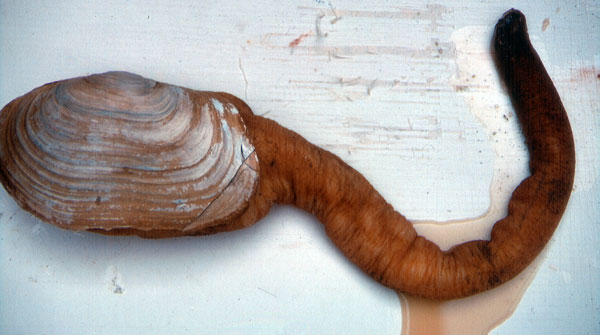 So said Dr. Richard J. Long (a.k.a. Joey Skaggs), also known as Dr. Dick Long, a marine biologist, oceanographer and environmental activist. Long had concluded that the Japanese and other Asian cultures were exporting the geoduck at an unsustainable rate to satisfy the voracious demand for aphrodisiacs.

Dr. Long founded the “Save the Geoduck Committee” and called for the immediate halt of the commercial harvesting and exporting of what he considered to be an endangered species about to become extinct.

Up until 1969, the geoduck had been considered a negative tide sport clam. When the moon and the tides were right, clammers would don their rubbers and go out with buckets and shovels and dig furiously to unearth and capture the giant clams. The fishermen considered them a delicacy for chowder and sushi.

In 1969, the State of Washington realized they had the potential for a multimillion dollar annual crop and began leasing the waterways to commercial geoduck harvesters. 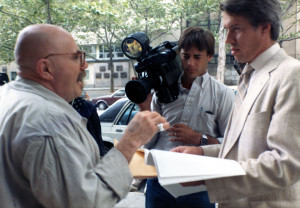 The “Save the Geoduck Campaign” satirized a list of American grievances actively in the news including: Japan-bashing because of the U.S. trade imbalance and our huge national debt (the Japanese were being blamed for America’s greed, bad economic planning and poor business judgment); the Chernobyl nuclear reactor disaster; environmental and animal rights activism; and the need to point a finger and blame someone else for all our problems.

The following year, in an ironic twist of life imitating art, the King County Prosecutor filed charges against the largest geoduck harvester in the state for over harvesting the clams to the tune of millions of dollars.

Skaggs corresponded with Senator Mike Kreidler, who was amused by the Geoduck satire. He shared a bill he had authored to “correct the shortcomings of the Department of Natural Resources and Department of Fisheries with their leasing, regulating and enforcement.”

The entire story came to light in 2010 when author Craig Welch published, Shell Games: Rogues, Smugglers, and the Hunt for Nature’s Bounty

a book about actual intrigue rife throughout the shellfish trade in the Pacific Northwest.