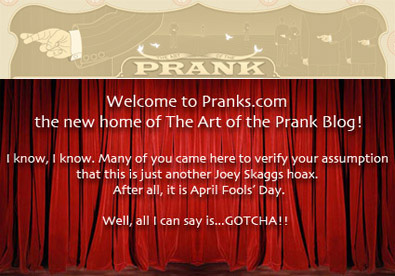 Soon after, he changed the address to artoftheprank.com to more closely reflect the subject matter. Here visitors find insights, news and discussions on everything to do with pranks, hoaxes, culture jamming and reality hacking – past, present and future – mainstream and counter culture around the world.

With Skaggs as editor, the site has submissions from many known and not so known pranksters, artists, performers, activists and writers. ArtofthePrank.com provides a continuing and growing exploration into the art of the prank; the role of the prankster as artist, activist and social observer; and the contribution of the prank to society.

Pranks have traditionally been relegated to the realm of the juvenile bad-boy or special occasions, like April Fools Day. People typically think of the word prank as referring to funny, embarrassing, humiliating, non-redeeming acts of just plain silliness or revenge. And while this may represent the majority of pranks in the world, the role of the prankster throughout history has been quite significant and influential. Mythic archetypes such as the trickster and coyote; the jester in the royal court; and pranksters throughout literature are all explored.

In addition, topics such as pranks in the news; political pranks; First Amendment issues; hoax etiquette; publicity stunts; urban legends; illusion and magic; fraud and deception; hype, spin and propaganda are all fodder for thought. As are, of course, all sorts of practical jokes and mischief.

Pranks offer an alternative palette for criticism and dissent, as well as a looking-glass into the human gullibility that results when critical analysis is suspended for wishful thinking. “I challenge personal belief systems that sustain status-quo thinking and that support close-mindedness, bias and prejudice,” says Skaggs. Key motives running throughout his personal work are to inspire people to question authority in all of its guises and to ultimately think for themselves.

With this endeavor, Skaggs hopes to reach a broad audience of people interested in the intersection of reality and illusion. Those interested in contributing content are invited to do so. Information about how to submit material can be found on the right hand column of the blog in the “More” section.

ArtofthePrank.com is meant to shed light on all aspects of the topic, examining the intent, content, technique, and the magic that makes a prank live. It includes tutorials and how-to instructions. Although the site will not encourage or condone irresponsible, misguided, unlawful or unethical practices, some meaningful pranks rightfully test the limits and cross the boundaries of lawfulness. To trivialize, ignore or dismiss them for this reason would be a disservice to everyone.

The ArtofthePrank.com Web site was designed by David Bunde of DGB Design and is hosted by Laughing Squid.