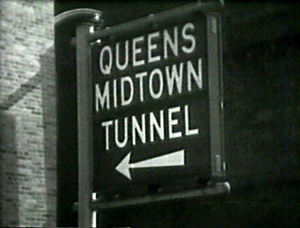 Artist Joey Skaggs, having lived on the Lower East Side for a number of years, grew increasingly annoyed by the tourist buses that would cruise through St. Marks Place in the East Village gawking at the long haired hippies. Squares from suburbia, acting as if they were touring a zoo, snapped photos from the safety and comfort of their site-seeing buses.

In an ironic reversal, a put-on of middle class values, Skaggs rented a Greyhound bus, loaded it with 60 bearded, beaded, long haired hippies, and took them on a site-seeing cruise of suburban Queens, New York. 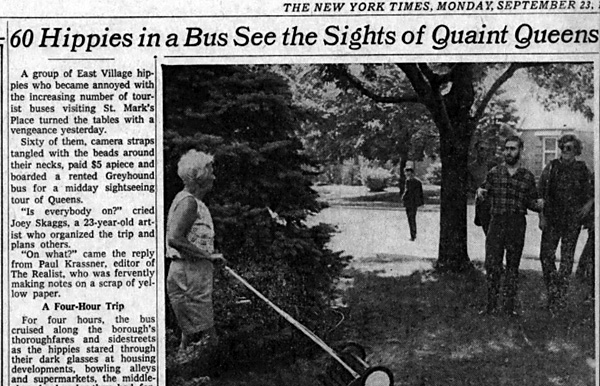 He had intended to be the tour guide, however, because of advance publicity in the Village Voice he was busted for illegally operating a tour business without a license. City officials, fearing negative press, agreed not to prosecute him if he would hire a licensed tour guide. Skaggs complied and for $25.00 hired tour guide Bob Lake.

Skaggs treated everyone on the bus to $.14 hamburgers at White Castle, where eight patrons quickly exited through a side door exclaiming, “We’re being invaded.” For dessert, the group was treated to ice cream at Howard Johnsons on Queens Boulevard.

They cruised through neighborhoods snapping photos of people mowing their lawns and washing their cars. Then they stopped at Hillside’s Nirvana head shop where everyone disembarked including the space rock band “Group Image” who performed and Yayoi Kusama, a Japanese avant-garde artist, who painted polka dots on writhing naked bodies dancing to the beat.

A parade of journalists, including a crew from The Today Show, followed the bus and documented the entire event. After this very successful tour, Skaggs was approached by Greyhound Lines to become a tour guide for similar future events. He declined. 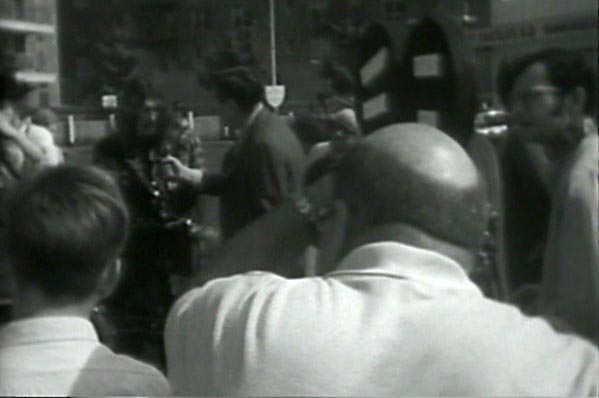 In 2017, Art of the Prank, the documentary film about Joey Skaggs by Andrea Marini, featured a clip from the Bus Tour to Queens.

In 2018, celebrating the 50th anniversary of the Bus Tour to Queens, Artsy.com featured a memoir by Joey Skaggs, When Pranks Become Works of Art.