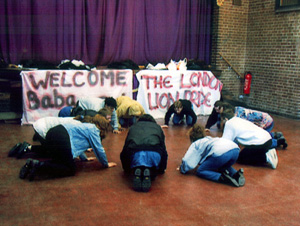 “Society’s normal restraints are left at the door of our meetings. By roaring and eating meat together as a family group, the pride is able to tap into a primal, almost trance-like state.” Baba Wa Simba

On February 17, 1995, Baba Wa Simba pulled up in a black limousine and checked into the London Metropole Hotel. He was to meet with his London Pride the next day and meet the press soon after. Born the son of American missionary parents in Kenya, Baba Wa Simba–Swahili for the Lion King–had grown up with the Masai at a lion sanctuary. After his parents were killed and eaten by lions, Baba Wa Simba came to America and traveled from city to city. Wherever he went he was drawn to disenfranchised and troubled youth. Because of his unusual background, he found he had a gift to share. So, over time, he developed his own philosophic approach to therapy, to heal the wounded animal within. Or, so he said. Baba Wa Simba was actually Joey Skaggs and the hoax was on the international media.

Baba told the media that he had formed prides of troubled inner city youth around the world. Groups of young men and women would gather together for roarings, mimicking the behavior of lions. In a circle, on all fours, they would begin with low guttural growls and work up to full throated roars. Baba would throw meat on the floor and the group would devour it without using their hands. Once sated, they would lick each other and fall into a peaceful group nap.

The British Channel 4 television show, “The Word”, keen to cover Joey Skaggs pulling a hoax on British soil, documented Baba Wa Simba’s London visit. They rented a parish hall and hired young actors who rehearsed with Baba for several days. The unsuspecting media was then invited to witness a therapy session with Baba’s London pride.

Some of television’s most respected commentators got down on all fours and roared their hearts out, including one of Brazil’s most famous newscasters, Pedro Bial. They all professed to finding the session very therapeutic until “The Word” aired a week later and the hoax was exposed.

Not one media outlet revealed that they had been hoaxed. Skaggs is still roaring with laughter!

Five years later, Skaggs was invited to speak in Sao Paulo, Brazil, at the Catholic University. Contacted in advance by Veja–a magazine similar to Time or Newsweek in the States–Skaggs mentioned to the journalist that he had hoaxed Pedro Bial, one of Brazil’s most famous newscasters, who at the time was considered on a par with Walter Cronkite. When Veja contacted TV Globo to verify this information, they denied it was true and accused Skaggs of lying.

During Skaggs’ lecture presentation, he told this story and then produced a surprise video for the audience. When the audience heard Pedro Bial’s voice over the images of prowling African lions, they immediately started screaming. They recognized his voice without even seeing his face. Veja rushed to press with a follow-up story to retract their earlier accusation.

Channel 4 “The Word” exposé of the Baba Wa Simba hoax: