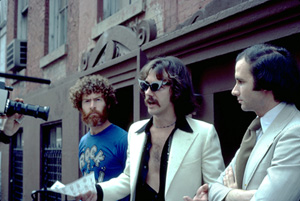 In July of 1976, Giuseppe Scaggoli, proprietor of the Celebrity Sperm Bank, planned to hold an auction of rock star sperm in New York City. The sperm bank promised, “We’ll have sperm from the likes of Mick Jagger, Bob Dylan, John Lennon, Paul McCartney, and vintage sperm from Jimmy Hendricks. All donations are certified and authenticated.” Scaggoli (a.k.a. Joey Skaggs) asked about 50 actor friends to gather on Waverly Place between 6th Avenue and MacDougal Street, in front of the brownstone home of his attorney. They put up a name plate that said Celebrity Sperm Bank. 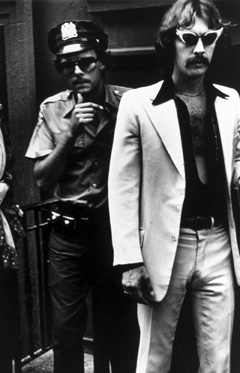 Some of the actors portrayed rock musicians, some were groupies, and some were women with protest signs such as “Do it the old fashioned way.” There was a sociologist, a psychiatrist, several lab technicians, some doctors, and a priest. The police officers were real.

The bogus crowd drew a real crowd. Passersby mingled with the actors. As did the police, trying to control the group. While the “customers” waited to be allowed into the facility, feminist picketers started heated discussion with right-to-lifers. The priest picked an argument with a police officer.

When the timing was right, Scaggoli appeared with his lawyer to announce that the sperm had been stolen in the middle of the night and that detectives were working on the case. So rather than an auction, there was instead to be an impromptu press conference.

The crowd was outraged. Women clients were dismayed to have lost this opportunity. The psychiatrist stepped forward to articulate the case of his young patient who never knew her real father. A reward was offered for the return of the sperm of a rock star named Norman by his girlfriend. Scaggoli apologized to the group and promised there would be more sperm donated soon and the auction would be held at a later date. The police moved in to disperse the crowd. There were no arrests.

The sperm bank received hundreds of calls from wannabee recipients and from the media around the country. Ultimately, the piece was televised both on cable and on national TV. The aborted sperm bank auction was featured on many radio shows, in Ms. Magazine and in music industry trade publications. And, Gloria Steinem, not knowing it was a hoax, awarded the Celebrity Sperm Bank (along with Skaggs’ Cathouse for Dogs, perpetrated the same year) the Earl Butz Award for Bad Taste on an NBC special 1976, The Year that Was.

Skaggs called Ms. Steinem to let her know they were both hoaxes. She never issued a retraction, but she asked Skaggs, if he ever did something like this again, to let her know in advance so she wouldn’t be fooled.

The purpose of this hoax was to satirize the possibilities inherent in our advanced medical technology. It also satirized the media’s interest in sexual news items. In this case, imagination preceded science. This hoax pre-dated, by several years, the “Repository for Germinal Choice,” through which a group of Nobel Prize-winning scientists donated sperm to inseminate super-bright women to breed geniuses.