The Story of the ‘Portofess,’ the Prank Confessional Booth at the 1992 Democratic Convention, by Sarah Laskow, Atlas Obscura, July 14, 2017

Artist Joey Skaggs fooled everyone and pedaled off 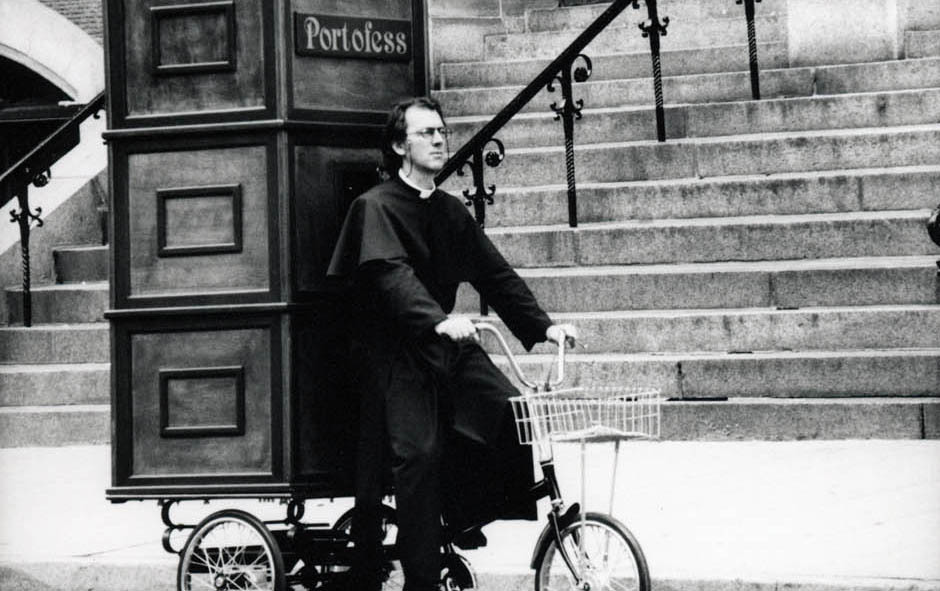 At 1992’s Democratic National Convention, a Dominican priest showed up on a tricycle. Attached to the back was a confessional booth, with a sign that read “Portofess.” The priest said he biked to New York, where the convention was held, all the way from California. The church, according to the priest, needed to take a “more aggressive stance and go where the sinners are.” He was ready to take confession from any politician who wanted or needed it.

The Portofess made papers all over the country. But soon enough Reuters revealed that the Archdiocese in California had never heard of this priest, who called himself Father Anthony Joseph or, sometimes, Father William. All other efforts to find him after the convention failed, as well, because he wasn’t a priest at all, but a character conceived by artist and activist Joey Skaggs, who has perfected the art of pranking the media.

Skaggs’s works include “Fish Condos” for upwardly mobile guppies, “Santa’s Missile Tow,” which featured Santa and his elves bringing a missile to the United Nations, and many other sculptures and performances. He talked to Atlas Obscura about what it took to create the Portofess and what reactions he got from the police, protestors, and the public. Read the whole interview here.