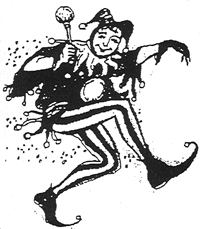 The only New York City parade dedicated to conspiracy theorists!

New York’s irreverent April Fools’ Day Parade, poking fun at the past year’s displays of hype, hypocrisy, deceit, bigotry, and downright stupidity, is back for the 36th year!

WHAT:
The New York April Fools’ Day Parade was created in 1986 to remedy a glaring omission in the long list of New York’s ethnic and holiday parades. These events fail to recognize the importance of April 1st, the day designated to commemorate the folly of mankind. In an attempt to bridge this gap and bring people back in touch with their inherent foolishness, the parade annually crowns a King or Queen of Fools from parading look-alikes.

WHY:
There’s no shortage of fools this year, so the parade will go on.

WHEN/WHERE:
Thursday, April 1, 12 Noon to 3 PM. The parade starts at 5th Avenue & 59th St. and marches down 5th Ave. to Washington Square Park for the climactic crowning of the King of Fools.

WHAT TO EXPECT AND HOW TO JOIN IN:
For the 36th year, the public is invited to create outrageous floats and dress up as look-alikes in colorful costumes to reflect the folly of the nuttiest politicians, crooked corporate leaders, silly celebrities, and whoever else has proved to be a total fool in the past year.

Floats should be no wider than 10’ and no longer than 30’. They can be self-propelled, towed, pushed or pulled. Customized bicycles, tricycles, baby carriages and helium balloons are welcome. The Parade Committee assumes no liability for damage caused by satire.

The theme of the parade this year is “DENY, DENY, LIE, LIE!” The parade’s Grand Marshall is Texas Senator Ted Cruz in a sombrero dragging a rolling suitcase. He’ll be followed by the QAnon Marching Band singing the Village People’s “Macho Man.” Color commentary will be provided by former Fox News commentator Lou Dobbs. Security will be provided by the Proud Boys and Oath Keepers who will be standing back and standing by.

The parade will lead off with Donald Trump Jr. driving a Trump 2024 Campaign Bus. Anyone voicing opposition to his dad’s claims of voter fraud will be promptly thrown under the bus. Next up is the Georgia Republican Election Officials Float waving 11,780 Biden votes they’ve miraculously found for Trump. This will be followed by a float with a Scale Model of Mount Rushmore with Trump’s Face Added, an Exhibition of Displaced Confederate Statues, and a Shipping Container brimming with Stolen Podiums, Flags, Computers, Important Papers, and Cell Phones from the January 6 Capitol Insurrection. All of these and some Spin Art attached to a Non-Fungible Token (NFT) on the Mobile Ethereum Mining Float will be auctioned by Christie’s to help fund next year’s event (Cryptocurrency only).

That’s just the tip of the iceberg!
Visit http://aprilfoolsdayparade.com for more details.