Good morning on this dank Friday.

But the April Fools’ Day Parade? 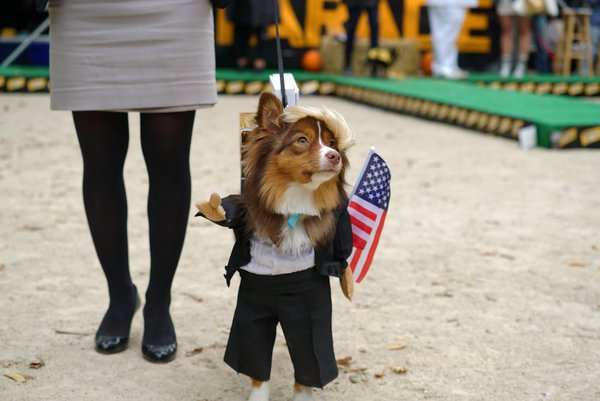 Catch me on the “Dogs Dressed as Donald Trump” float. NICOLE BENGIVENO / THE NEW YORK TIMES

The procession is expected to file from 59th Street and Fifth Avenue down to Washington Square Park, beginning at noon, rain or shine.

Organized by the New York April Fools’ Committee, the spectacle is intended to poke fun at public figures — celebrities, politicians, executives and anyone else who has proved deserving of caricature.

“Nothing is sacred. Our satire knows no bounds,” the committee said in a statement, adding, “The Parade Committee assumes no liability for damages caused by satire.”

Kim Jong-un, the leader of North Korea, (a look-alike, of course) leads the parade, sitting atop a ballistic missile float.

And Kanye West rides the “Infinity Mirror” float, because, well, organizers think he could stare at his own reflection until the end of time.

To all of the above.

The nonexistent parade is solely a fixture in the imagination of the New York artist Joey Skaggs, a prankster who creates elaborate hoaxes as a form of social activism.

He’s blasted out news releases, posted videos and has managed to get his April Fools’ Day Parade website appearing near the top of search engine results.

“It’s a mystery to me how we continue to enable fools to make fools of us,” Mr. Skaggs said.

Read the rest of this article here