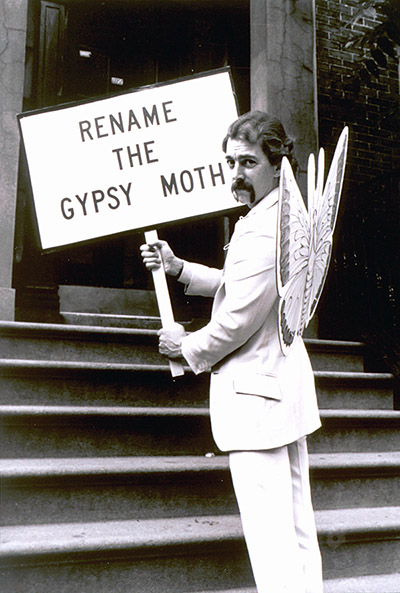 Jojo, King of the New York Gypsies (a.k.a. Joey Skaggs), protesting to rename the Gypsy Moth in 1982

The news media is all a-flutter with headlines about the rise and proliferation of fake news media: “Did Russia Install Donald Trump As the Next U.S. President?” “It’s About To Get Worse!” “Living in a Media Bubble” “Can American Democracy Survive?” Excuse me? Wait a minute…

Propaganda and disinformation have been an integral part of our daily dose of information forever. In essence, everywhere you look, whether it’s the allegedly trustworthy mainstream media or the not-so-trustworthy social media alt-right or left-trending news stories, someone is always peddling influence.

It wasn’t just the Russians who supposedly engaged in influencing election results by hacking emails and proliferating fake news that damaged the Democrats’ pursuit of the White House. Americans can’t play the innocent victims here. We’re all using the same propaganda techniques. Now, because of warp-speed Internet and social media delivery systems, we have a perpetual game of Propaganda Pong, and the onslaught is much more ruthless and, at the same time, highly profitable financially.

That’s what life is like these days. You’re either the provider or the recipient—or more likely both—of propaganda and disinformation.