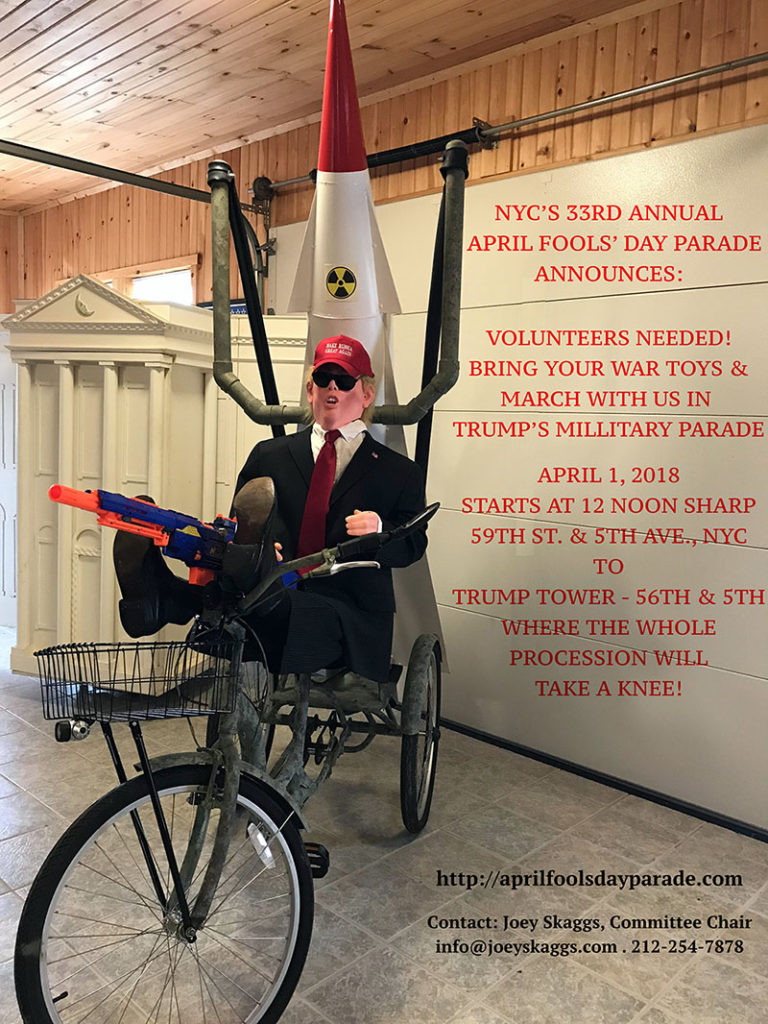 If you’re in New York City on Sunday, April 1, 2018, join the April Fools’ Day Trump Military Parade and show the world how grandiose and out of touch America’s leader really is.

Bring your artillery! All military toys, tanks, planes, helicopters and GI Joe soldiers are needed. Help us amass the largest assembly of military might the world has ever seen for President Donald Trump’s tremendous and amazing Military Parade.

All marching personnel will have Donald Trump look-like masks and will march from 5th Ave. and 59th St. to Trump Tower to take a knee. Download and print a Trump mask here. If you can’t print a mask, we’ll have one for you.

New York’s irreverent April Fools’ Day Parade returns, poking fun once again at the past year’s displays of hype, hypocrisy, deceit, bigotry, and downright foolishness. Nothing is sacred. Our satire knows no bounds. The parade this year will be a massive “TRUMP MILITARY PARADE” celebrating our president’s greatest fixation — himself.

The public is encouraged to participate, in or out of costume, with or without floats, and may join the procession at any point along the parade route. Floats can be no wider than 10’ and no longer than 30’. They can be self-propelled, towed, pushed or pulled. Customized bicycles, tricycles, baby carriages and aerial balloons are welcome. The parade will start at 59th St. and Fifth Ave. at 12 noon, and will pass by Trump Tower at 12:15 pm where everyone will take a knee. The Parade Committee assumes no liability for damages caused by satire.

The New York April Fools’ Day Parade was created in 1986 to remedy a glaring omission in the long list of New York’s ethnic and holiday parades. These events fail to recognize the importance of April 1st, the day designated to commemorate the folly of mankind. In an attempt to bridge this gap and bring people back in touch with their inherent foolishness, the parade annually crowns a King or Queen of Fools from parading look-alikes.