Joseph Adore (aka Joey Skaggs) was born with an extremely acute olfactory sense and was personally responsible for more drug busts than any DEA agent in history. 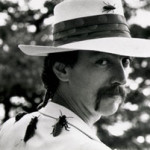 “We have much to learn from cockroaches,” said entomologist Dr. Josef Gregor, (aka Joey Skaggs). “They’ve been around for 350 million years.” Gregor, leader of a group called Metamorphosis, said he had bred a superstrain of roaches, extracted their hormones and made a vitamin pill which cured arthritis, acne, anemia and menstrual cramps and made one invulnerable to nuclear radiation. 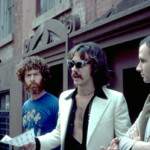 In July of 1976, Giuseppe Scaggoli (aka Joey Skaggs), proprietor of the Celebrity Sperm Bank, planned to hold an auction of rock star sperm in New York City. But when the sperm samples were stolen the night before the auction, havoc and mayhem broke out in the street.