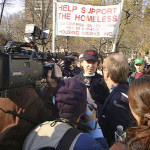 On December 4, 1999, Joey Skaggs and a team of co-conspirators marched into Washington Square Park toting a 10’ x 14’ painting of New York Mayor Rudy Giuliani as the Madonna and a large vat of elephant dung. The painting was a satirical replica of the Chris Ofili painting “Holy Virgin Mary” which was part of the Brooklyn Museum’s “Sensation” show. The Mayor had recently attempted to defund the museum because, to him, the artist’s use of elephant dung instead of paint was offensive. Skaggs’ plan was to offer the public an opportunity to doody Rudy with Dumbo’s dung.